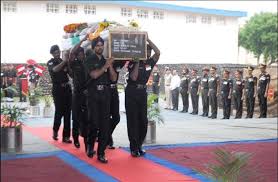 Sepoy Babloo Singh and Sepoy Vishal Chaudhary laid down their lives in service of the Nation in on Saturday, July, 30, while foiling an infiltration bid by Pakistani terrorists in the Nowgam area of District Kupwara, Kashmir.

On Sunday July 31, their bodies were flown to Delhi in an Air India plane and then sent to their hometowns in Army helicopters. Sadly, the last rites of Sepoy Babloo Singh and Sepoy Vishal Chaudhary have not elicited any attention whatsoever.

No doubt the army did everything possible to pay tribute to its fallen soldiers. A Wreaths was laid by the Chief of Army Staff personally at the Delhi airport. The media, however, failed to give to the cremation the attention that it deserved. Disregard on the part of the government and the civil society is also palpable.

In Kashmir, not even a passing thought has been given to the brave hearts. No word of condolence from the chief minister of the state or her ministers; no tribute to the bravery and sacrifice of the brave hearts; no thanksgiving for the great service that the soldiers had rendered to the people of Kashmir.

The problem is that nobody in Kashmir has the time to think about such things. Over there the killing of a terrorist is causing a public frenzy, to the extent that the elected government is on its knees trying to pacify a few errant, anti-national forces.

It seems that the present young generation of Kashmir is not aware that the atrocities stopped only when the Indian Army, with the support of the Kashmiri’s themselves, neutralised the cult of terrorism. They have no value for the grievous loss of life and limb that the soldiers of the country suffered while performing this herculean task or for the sacrifices made by their elders.

The continued thrust of infiltration and terrorist initiated violence in the Kashmir Valley is an indication that the objective of the enemy to suppress and subjugate the region has not waned one bit. His problem is that he no longer has the means to do so; he is, however, leaving no stone unturned to reinvent the same.

Success is not coming his way because the Indian soldiers remain ever willing to protect their fellow citizens in Kashmir even at the cost of their own lives, as is amply proved by the unheralded martyrdom of Sepoy Babloo Singh and Sepoy Vishal Chaudhary.

The spike in terrorism related violence in the Kashmir Valley and the internal unrest is a deliberate attempt by Pakistan to exploit the situation that has evolved after the killing of the terrorist Burhan Wani.

Apart from attempting to enhance the threshold of violence, Pakistan has also launched a vicious Propaganda campaign to discredit the counter terrorism posture adopted by India in Kashmir.

Pakistan has been projecting Burhan Wani as a freedom fighter and has even organised a “Black Day” to protest his killing. It is astounding to note that a wanted terrorist like Hafiz Saeed is being allowed by the Government of Pakistan to go on air and demand that the Indian Home Minister should not be allowed to visit Pakistan because a terrorist like Burhan Wani has been killed in Kashmir. Things cannot get more blatant than this.

Burhan Wani was a terrorist functioning under the diktats of foreign masters. He had picked up the gun against his own people. He was responsible for the death of many innocents and had caused great pain and suffering among his Kashmiri brethren. Yet, at the behest of Pakistan, some in the valley have the temerity of eulogising him as a hero.

The senior functionaries of the state government are making one placatory statement after the other and thus exposing the insecurities and contradictions of their coalition.

Chief Minister Mehbooba Mufti, in a recent statement, has suggested that Burhan Wani may have been given a chance to survive had the forces known that he was among the group of terrorists that they were pursuing; her Deputy Chief Minister, Nirmal Singh, who is from the BJP, also made a feeble attempt to echo her sentiments. On being faced with widespread criticism, he quickly retracted the statement.

This issue needs to be put to rest once and for all. Security forces do not have any political agenda, and as such, they would not make any distinction between Burhan Wani or any other terrorist. They would launch a counter-terrorist operation in a professional manner, avoid civilian casualties and collateral damage, try to capture the terrorists alive and, if the tactical situation so demands, kill them in the shortest time possible.

It is time to look at reality in the face in Kashmir. The sacrifices of the Indian army, other security forces and the people of the region, who have jointly defeated the cult of violence and terrorism, cannot go in vain. Those laying down their lives for the safety and security of their fellow citizens in Kashmir cannot be sidelined in favour of a petty terrorist. The likes of Burhan Wani cannot be allowed to dominate the destiny of the region. Pakistan cannot be allowed to exploit internal weaknesses and contradictions and dominate the political narrative. This is the mandate of the state government and this is what the people expect it to do.