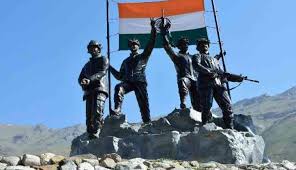 India is celebrating, in this month of July, the 20th anniversary of the Kargil War, a military epic fought at heights over 16000 feet and temperatures as low as minus 15 degree Celsius. The ignominious designs of a belligerent neighbour (Pakistan) to violate the territorial integrity of the nation were thwarted by a military action that has no parallel in the annals of military history.

The war was necessitated due to Pakistan’s ignoble attempt to occupy the Kargil heights in Indian territories with the objective of isolating Ladakh and occupying the Siachen Glacier and at the same time opening a route for ingress of militants into the Kashmir Valley. The plan was spearheaded by General Pervez Musharraf, then Chief of Army Staff of the Pakistan Army. It culminated on 26 July 1999 with Pakistan lamely announcing the withdrawal of its battered troops when there was very little left to withdraw.

The entire nation is poised to celebrate the historic occasion. The Indian Army has already set the ball rolling with a series of activities. In the battleground the army is recreating the historic events by undertaking a series of commemorative treks in honour of the martyrs. The treks are being conducted by the battalions that fought in the sectors. A trek to Tololing Top has been undertaken by 2 Rajputana Rifles. Similarly separate treks to Batra Top and Tiger Hill have also been undertaken by 13 Jammu and Kashmir Rifles (JAK RIF) and 18 Grenadiers.

The Chief of the Army Staff, General Bipin Rawat, has released a Kargil War Tribute Song titled, “Tujhe Bhulega Na Hindustan” that honours the martyrs and war veterans who fought the epic battles. The lovely and nostalgic song brings alive the sacrifices made by our young soldiers in service of their motherland. No Indian can listen to it and not get emotionally moved while feeling immensely proud of the Nations soldiers.

An Army think tank, Centre for Land and Warfare Studies (CLAWS) has, on this occasion, published a book titled “Surprise, Strategy and ‘Vijay’: 20 Years of Kargil and Beyond.” A curtain raiser on the book by Nikita Kohli describes it as, “An account of the war from various commanders, an in-depth analysis of the operations, the logistics, the movements, and of intelligence in the months of May, June and July 1999 and “…..predictive analytics provided by some of the most senior military officers of the country.” It will definitely be a good read.

President Ram Nath Kovind is scheduled to lead the memorial service at the Dras War Memorial on 26 July and Prime Minister Narendra Modi will honour the heroes at the National War Memorial in New Delhi on the same day. The entire Nation will join the leaders in remembrance of the great deeds of valour and pay homage to the heroes.

As the twentieth anniversary of the war approaches, it would be appropriate to revisit the treachery, duplicity and deceit that went into its planning and execution by Pakistan. Even as India was being feted with an olive branch by Pakistan, with the “Bus Diplomacy” of Prime Minister Atal Bihari Vajpayee being in full swing, the troops of Pakistan Army were already on their way to stealthily occupy Indian territories in Kargil.

The Pakistan Army, under the leadership of General Musharraf, factored in a normal winter, a weak and vacillating Indian reaction, a strong element of surprise, and most likely a strong international intervention for fear of a possible nuclear escalation. All tenuous probabilities not based on rational analysis. The then Prime Minister, Nawaz Sharif, has gone public to acknowledge complete lack of information about the operation; Benazir Bhutto openly condemned the same.

Having decided to launch the operation, the Pakistani leadership sent in troops of the Northern Light Infantry (NLI) for the same. The NLI comprises exclusively of troops from Pakistan Occupied Jammu and Kashmir. Being from a backward and underdeveloped area, their education levels are low. They are hardy, innocent and well disciplined troops who exude a great sense of loyalty. However, they are looked down upon by their Punjabi counterparts and are given a status of low grade soldiers. It is these troops that the Pakistani military hierarchy decided to sacrifice at the altar of its unsustainable ambition. They were, in other words, cannon fodder.

The response of the Indian Amy to Pakistani belligerence was politically righteous and militarily courageous beyond the call of duty. That the entire nation stood behind the soldiers is what made the victory even more enduring. The restraint and maturity shown by the country won for it international acclaim and moral ascendancy over Pakistan.

No sooner was the battle joined, the intruders realised the harsh reality of the treachery of their own leaders.  The result for this hapless body of troops was an ignominious death under conditions of great deprivation and humiliation.

While getting into a celebratory mood in view of the great victory it is also important to remember that the India Army was not adequately prepared for the enemy action. There was an intelligence failure and shortages to contend with which compelled the then Indian Army Chief, General VP Malik to ominously state, “We will fight with what we have.” Despite the handicaps, the Indian response was swift and more importantly, abounding in courage. The tactical advantage of the enemy sitting on high ground did not deter the resolve of the Indian soldiers to throw him out of Indian soil.

The Government of the day within three days of the victory set up a committee, “To examine the sequence of events and make recommendations for the future.” The Kargil Review Committee (KRC) extensively reviewed thedevelopments and gave extensive recommendations on the measures to be undertaken to prevent such an occurrence in the future. Sadly, the recommendations of the committee have not been implemented even in part twenty years after the battle. Such procrastination in matters of defence and security do not augur well for the nation.

This is an apt occasion to rise above petty egos and blinkered viewpoints and look at the national cause in its entirety. While showering laurels in the Kargil martyrs and heroes, it is also important to ensure that the serving soldiers have what they want to guard the Nation. The Nation should take a vow to never let its soldiers remain wanting for anything whatsoever.

(Jaibans Singh is a columnist, author and commentator)