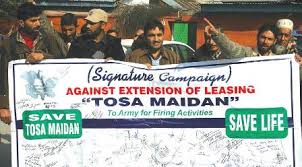 Tosa Maidan is a meadow in the Budgam district of the Kashmir valley. The area was leased out to the Indian army in 1964 for use as a firing range; the lease has been extended a few times since then. Expiry of the current lease that falls on April, 18, 2014, could not have come by at a better time for the divisive forces. It has given to them adequate ammunition for their campaign to discredit the Indian army at a time when sensitive parliamentary elections are being held in Jammu and Kashmir. Wild allegation are being made to whip up passions against the Indian army when it is totally involved in assisting the police and administration in ensuring safe, free and fair elections.

What is more unfortunate is that some members of the ruling coalition have also been making loose statements for electoral gains. The state finance minister Abdul Rahim Rather, in an election rally has reportedly said that the government would not extend the lease; no such decision has been formally communicated to the army by the state government.

Tosa Maidan has become more of a political issue than anything else. It is being connected to well established political postures like revocation of Armed Forces Special Powers Act, de-militarisation etc that have no relation with the issue at all. It is quite evident that divisive elements like the Hurriyat will not stop their obnoxious campaign of vilification against the army even if the lease is not extended. In fact the non-extension of lease will lead to even more stringent demands for “de-militarisation.”

The issue has been under consideration of the army authorities and the state since November, 2013 when a decision to constitute a committee to deal with the subject was taken during a civil-military liaison conference held under the under the chairmanship of the chief minister. In a recent meeting of the committee held at Jammu and presided over by Chief Secretary Mohammad Iqbal Kanday, the Army has expressed willingness to explore alternate sites to relocate the field fire range. The problem lies in identification of a suitable location due to the snow bound conditions in the higher reaches where a suitable site away from a population centre could be identified.

The Hurriyat, however, is in no mood to let go of this rabble-raising opportunity. It is sending delegations to the area to whip up popular support and flooding the media with misinformation to gain the desired end of maligning the army. The separatists even have a problem with the option of finding an alternate site for the field fire ranges that the government and the army are looking at.

Deployment of artillery in the region is an imperative security requirement. It should not be forgotten that it was the artillery that played a vital role in ensuring victory in the Kargil war. The artillery units posted in Kashmir use the Tosa Maidan firing range to calibrate their guns. The need to do so in-situ is dictated by the prohibitive cost and great effort required for transporting heavy artillery equipment by road from the valley to the bigger ranges in central India. Also, the over taxed Jammu-Srinagar highway would not be able to take the load of such a large military movement. Baseless politicising of the issue will not accrue any tangible results; a solution has to be found within the realm of practicality.

Are the firing ranges at Tosa Maidan actually causing the kind of inconvenience that is being projected? Logic dictates an answer in the negative! The area being backward draws sustenance from the proximity of the army; the issue now being hotly debated has not even been mentioned in political circles over the last five decades when the lease period was in place. Evidently, the people were not as fed up with the situation as is being made out now. There are many reasons to believe that the latest stringent demand is the product of a political vested interest with active support from the media.

Much is being said about the huge tourism potential of Tosa Maidan. Does the State government have a concrete plan for building such tourist infrastructure that can provide sustenance of the people in case the army walks away? There are so many places in Kashmir that are much more beautiful than Tosa Maidan, have these been developed as tourist destinations? For decades now the tourism circuit has remained unchanged in the Kashmir valley, what is available is also not being maintained so what additional effort can be expected in the near future? If not tourism than what is Tosa Maidan worth in terms of economic activity?

The army on the other hand is undertaking a number of social uplifting and development initiatives to compensate for the inconvenience being caused to the people. At least now the locals are earning their keep from the presence of the army, if this also goes than what would be their fate?

Over the years fool proof procedures have been put in place to ensure that no casualties take place during firing, the locals are informed well in advance by both the officials of the government and the army representatives themselves about a firing schedule. It is further ensured that the range is clear of all human presence before firing commences. The few deaths that have occurred have been because of collection of residual material of shells that fetches a handsome price.

The argument of environmental degradation also does not hold much merit because on ground it is the army that is stalling the process of deforestation by putting a stop to timber smuggling. This apart the Bakerwals are allowed to graze their stock in the area whenever there is a lull in the firing which helps in their sustenance. The invaluable biodiversity of the area is intact because of the presence of the army; this is a sterling contribution towards maintaining the ecological balance.

The future of Tosa Maidan should not be decided on the basis of self-centered politics. That the separatists will do everything to embarrass the army and cause inconvenience to the troops is well known; now even the mainstream seems to be looking at some personal political gains in the election year. Any decision made under such circumstances cannot be deemed to be in the interest of the people.