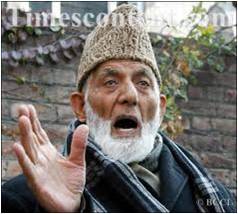 The Indian government has finally built up courage to question the Kashmiri separatist leader, Syed Ali Shah Geelani. He has been questioned for 15 minutes by the Delhi Police at the Lodhi Colony Police Station on the issue of giving recommendation for travel to Pakistan to one Athesham Malik who has been arrested along with two others for links with the dreaded Lashkar-e-Toiba (LeT). Athesham Malik is believed to have been trained in Pakistan in the art of bomb making. He, along with two accomplices, is suspected for hatching a plan to bomb a crowded market in New Delhi. The very fact that the Geelani has been summoned for questioning is a giant step forward for the Indian government which has, till now, allowed this man to continue with his blatant anti-India activities without any fear or constraint.

Before Geelani proceeded for the questioning his spokesperson, Ayaz Akbar, laid down the foundation of the entire process by stating to the media that his leader had no knowledge about the case. “Generally, if any Kashmiri comes to Geelani Sahab for recommendation, he gives his recommendation only because they are Kashmiri. But then how can he know why he wants to go there and what his motive is?” he said. Thereafter, Geelani went to the Police Station accompanied by two advocates and his son-in-law.

As is usual, Geelani adopted a belligerent posture and tried to give a political spin to the entire episode. He remained adamant on his stand of facilitating those intending to visit Pakistan. He told the police that he was not coerced into giving the letter to Malik and that he gives letters to many Kashmiri youth who want to go abroad for studies or work. “Yes, I facilitate those going to Pakistan and it is not an offence,” he said. He justified his action by adding that it was his moral responsibility and human obligation to facilitate the visit of divided Kashmiri’s and, in the process, if he had recommended a visa for a suspected terrorist he cannot be accused of any link with the man. He culminated his argument by emphasising that this was a “conspiracy” against him.

There is, however, more to the case than meets the eye. Athesham Malik is believed to have gone to Pakistan in December with the explicit intention of getting trained to assemble Improvised Explosive Devices. When he and his accomplice were arrested, an assembled bomb ready for use is said to have been found in their bag. The recommendation letter given by Geelani for getting a Pakistan visa was found in the papers seized from him. Malik, a resident of Sopore, Kashmir, was earlier arrested in 2007 along with two others. His father, Farooq Ahmed Malik maintains that his son had been kidnapped by a LeT Commander in Kashmir, Muzamil Amin Dar alias Usman, who indoctrinated him to become a terrorist and then put him through to Pakistan based commanders as a sleeper who could be used to conduct terrorist strikes across India. He has been on the radar of the intelligence agencies over the past few years. The Police is on the trial of Usman who has, as yet, not been arrested. It is also being said that Farooq Ahmed Malik had reportedly worked in political circles and was personally known to Geelani.

Surely Geelani, who in any case knows Kashmir especially Sopore backwards, would have been aware of Malik’s terror links when he gave the recommendation. In fact, Police sources believe that Geelani personally ‘suggested’ Malik’s name to an ISI officer from Pakistan who in turn facilitated his visa through the Pakistan High Commission in Delhi. This was the line of questioning adopted by the Delhi Police and this is what Geelani needs to answer once he gets over his bluster. The anti-India charges against Geelani do not end here; even as this investigation progresses, charges have been framed against one of his trusted aides for allegedly running a Hawala racket to fund banned terrorist outfit Hizbul Mujahideen in Kashmir.

The issue at hand is not the recommendation that Geelani has given for grant of Visa. This, in itself, does not constitute a crime and nor is it a matter of great consequence. The issue is the clout that Geelani holds with Pakistan; the advice that he seems to be giving to the Pakistani establishment with respect to its anti-Kashmir and anti-India policy and the remuneration that he seems to be receiving for giving the said advise. The Indian government needs to probe into Geelani’s involvement in the conduct of secessionist activities with foreign aid and support. Such activities, instead of going down because of the overwhelming mandate that the people of Kashmir have given to peace, progress and democracy, are on the increase and are now getting a Pan-India signature.

Investigations against Geelani need to be taken forward most vigorously. On the basis of the latest revelation of facilitating acts of terror across the country his involvement in fermenting illegal unrest in Kashmir by way of stone pelting, mass demonstrations and intimidation of traders and businessmen with money flowing from abroad need to be thoroughly probed. The Hawala transactions should propel into action agencies like the Economic Enforcement Directorate to investigate the massive funding which has led to propagation of terrorist activity in Jammu and Kashmir and the rest of India. There are many skeletons in Geelani’s closet which need to be brought out. It is time for the government to look at Geelani less as a leader of the people (who no longer repose any faith in him or his brand of politics) and more as a person who is blatantly indulging in secessionist activities in connivance with foreign inimical powers.