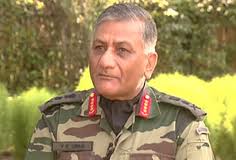 The Chief of Army Staff of the Indian Army, General VK Singh has, in an interview to the media,  given candid views on a number of issues related to security especially in the context of Kashmir. The Chief said that while the number of attempts to infiltrate from across the line of control in Kashmir have not declined the success rate has gone down drastically. He clearly asserted that tacit support is being given by some official agencies in Pakistan to the Jihad machinery that is in place to create instability in India especially Kashmir. Nevertheless, the present situation is undercontrol, law and order machinery is doing a good job and the army is well up in containing infiltration. On the issue of withdrawal of the Army deployment, the Chief said that as long as even one of the 42 identified terrorist camps operating in Pakistan Occupied Kashmir are in place the Army deployment along the LOC or in the hinterland will not be withdrawn, of course , some adjustments based on changes in threat perception will be carried out from time to time.. The Chief cautioned that India should look at Pakistani fundamentalists seriously even though there seems to be no immediate threat of the Pakistani nuclear arsenal falling in the hands of the fundamentalists.