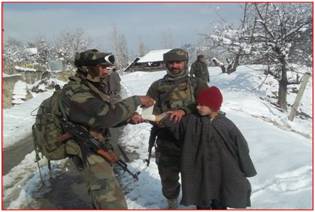 Winters in Kashmir are harsh and ruthless; this year the situation is particularly critical due to an exceptionally severe cold wave with sustained subzero temperature and heavy snow fall. The severity of the winter has led to many avalanches and landslides which have cut off the National highway, not to talk of the remote regions. There are many areas in Kashmir where access is difficult even during the best of times, in winter, they are completely cut off.

The beautiful snow capped mountains and frozen lakes look very nice in photographs but the people who have to live in such conditions wage a daily battle against the elements. The problems are even more severe in remote areas where electric supply becomes erratic, supply of fresh water ceases due to freezing of water pipes and facilities like health care get adversely affected. Under such difficult conditions that the units of the Indian army posted in Kashmir have come forward as messiahs for the afflicted people and are rendering to them life saving assistance to tide over the winter.

Heavy snowfall and inclement weather has put life out of gear in the Lolab Valley. Efforts by the district administration to clear snow from the main roads have brought only limited relief to the people. On January, 16, Yasmeen Beguam wife of Parvez Ahmed Naiku of village Walkul, Lolab Valley, would have lost her baby had not a quick reaction team of 28 Rashtriya Rifles of the army cleared the road with herculean effort to get her to Block Hospital, Sogam. On other occasions, Army troops carried out emergency evacuation of two more pregnant ladies from their villages located in remote areas to Sub-District Hospitals at Pampore and Kokernag respectively. A lady from Madar village in Bandipore, who was suffering from a post pregnancy complication, was evacuated in an Army ambulance to Government Hospital, Bandipore.

Dherian bowl is located in the extreme north of Lolab valley, beneath the Shamshabari Ridge. The road axis to Dherian bowl remains cut off in winters due to heavy snowfall. Troops of 18 Rashtriya Rifles Battalion have helped the local civilians of Dherian village by providing them rations, kerosene oil, opening of road axis, helping the sick and old persons with medicines and conducting medical checkup. This is simply one instance narrated from amongst numerous others

In spontaneous and unilateral actions to assist the people, both Counter Insurgency Forces of the Indian Army located in the Valley, Kilo and Victor, are regularly sending out foot and vehicle patrols to remote areas to provide assistance, especially medical help, to the needy. Special attention is being given to the sick and the elderly. A large number of villages of Kulgam, Anantnag, Pulwama, Shupiyan, Ganderbal, Badgam, Rajwar, Handwara, Lolab and Bandipura districts are benefitting from these humanitarian efforts. The doctors and nursing assistants who comprise of the patrols educate the people about preventive measures to be undertaken to avoid cold related life threatening emergencies like chilblains, frostbite etc.

Soldiers are helping the civil administration in distributing emergency relief and rations in far flung areas. Cooked food, blankets and drinking water is being provided at various locations; recovery teams with snow clearing machines are helping recover stranded vehicles on the roads. Any civil vehicle meeting with an accident due to skidding or some other reason is recovered by Army recovery vehicles; thus the highways are kept clear. The drivers and stranded passengers are being providing with refreshment, first aid, medicines and warm clothing. Soldiers are also assisting the government workers in re-erection of fallen electric poles and lines to keep communication intact. The aged and infirm are being provided with assistance in snow clearance; the army’s mobile generators are being used to facilitate spot charging for mobile phones, Army bowsers are provided water to many villages. All areas have widely advertised Army help line numbers to cater for emergencies.

Mobile medical teams under enthusiastic Army doctors are rendering medical assistance, distributing free medicines and facilitating evacuation of severely ill patients to Army and Civil Hospitals. In addition, all units have opened the doors of their Medical Rooms at Battalion Headquarters. Some areas which have benefitted from this activity include villages like Khunmoh, Khundru, Khreuh, Sombran, Pehlu, Kuther, Balhama, Zawoora, Sagipura, Dardpura, Panipura, Zaloora, Gujjarpatti, Rajwar etc. These villages come under Districts Kulgam, Anantnag, Ganderbal and Srinagar amongst others. Additional supplies of medicines continue to be released by Headquarters 15 Corps for meeting the spurt in requirement.

The blocking of the National Highway resulted in breakage of supplies and led to non-availability of commodities like kerosene and LPG. The civil administration approached the Army for help. Immediately, 1000 filled LPG cylinders from the Army’s buffer stock were handed over to Mr Parvaiz Ahmed Khan, Sales Officers, Indian Oil Corporation Ltd (IOCL), at Srinagar on January, 18. The Army has also managed to get people out of their homes for some entertainment to break the monotony of the winter. In a unique gesture, 14 Rashtriya Rifles organised a snowman/snow sculpture competition for the locals. The competition received tremendous response from the villagers.

Year after year, the army comes forward to provide all possible assistance to overcome the vagaries of nature. Simultaneously, maximum alertness and vigilance is ensured to maintain operational ascendency in the face of determined terrorist activity. This is the real face of the Army in Kashmir, this is how the Army lets action speak more than words and this is why the poor Kashmiri villager holds the Army in high regard. It is unfortunate that some vested interests lose no opportunity to vilify the good work being done by the he Army in the Valley. They fail to realise that fatuous words and baseless propaganda cannot dent this enduring relationship.