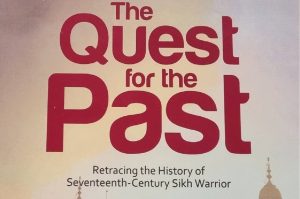 Punjab is the cradle of one among the oldest and most glorious civilizations in the world.  It is home to a people who have gained strength under the shadow of violence and adversity marked with small periods of intervening peace.

The book under review, “The Quest for the Past – Retracing the history of Seventeenth-century Sikh Warrior,” written by Iqbal Singh, a veteran Colonel of the Indian Army, chronicles the history of his family, the Ramgarhia Sardars (leaders) of Punjab. Its latest edition has been self published by the author in 2021. The 195 page book has  been introduced by Dr. Purnima Dhavan, Associate Professor, Department of History, University of Washington.

It covers the period from the tenth Sikh Guru. Gobind Singh, in the late seventeenth century (he was anointed Guru in 1676) to the present, covering nine generations of the family up to the author. With the grace of the almighty two generations of his progeny are taking forward the family name and legacy.

To understand the story it is necessary to briefly touch upon the evolution of the Sikh religion. Guru Nanak, born on 12 November 1469, laid the seed of the Sikh religion in the beginning of the sixteenth century and based it on the concept of Unity of God. “Na Koi Hindu Na Musalman” (There is no Hindu nor Muslim) he said at a time when Punjab was witnessing oppressive Islamic rule over a considerable Hindu population. The Sikh religion found favour with the people, especially so from Punjab, and they joined the Guru in large numbers.

The period of almost two and a half centuries from the first Sikh master, Guru Nanak, to the tenth master, Guru Gobind Singh, brought the Sikh religion into direct conflict with the ruling Mughal dynasty. The Gurus realised the need to build a Nation on the strength of military might so as to  stand up to the atrocities of despotic rulers. This marked unprecedented sacrifice by the Gurus and their families and witnessed the rise of the Sikhs despite great odds and challenges.

“The Quest for the Past” records the life and times of those who took the legacy of the Gurus forward. It covers the period when Guru Gobind Singh created the Khalsa, a community baptised to the ideology of standing for justice and righteousness to the extent of picking up arms against the oppressor and beyond.

Bhai Hardas Singh, the first protagonist in the book and elder of the Ramgarhia family was baptised a Khalsa by Guru Gobind Singh. He was a literary person who functioned as a scribe for Guru Gobind Singh and, in true spirit of the Khalsa, also fought many battles alongside the Guru.

Bhagwan Singh, the son of Bhai Hardas Singh also remained wedded to the cause of the Khalsa and the Sikh Nation. He too was a preacher as well as a mighty warrior with a contingent of Sikhs under command. He fought under the banner of Baba Banda Bahadur. Later he witnessed the bloody invasions by Nadir Shah and political machinations of Mughal officials like Adina Beg and Zakariya Khan. He dedicated all five sons of his to the cause and they fought by his side in various battles. Bhagwan Singh also fell heroically in a battle against the overwhelming forces of Nadir Shah. Thus was laid, with sacrifice of blood, the foundation of the Ramgarhia family.

The mantle of leadership then fell on the shoulder of Sardar Jassa Singh who created a very strong Misl and named it Ramgarhia in remembrance of the Ramgarh fort built by him in Amritsar. The family made a considerable contribution towards defeating simultaneously the weakened Mughals and the barbaric Afghan, Ahmed Shah Durrani, whose military genius was marred by their thirst  for blood and loot.At its prime the Ramgarhia Misl under Jassa Singh Ramgarhia controlled vast territories in Punjab and modern day Himachal Pradesh. It briefly controlled Delhi along with Sardar  Jassa Singh Ahluwalia and Sardar Bhagel Singh and made forays into parts of modern day Uttar Pradesh.

A profile of the author – Colonel (Retd) Iqbal Singh

The direct ancestor of the writer Iqbal Singh is Tara Singh Ramgarhia. He was the younger brother of Jassa Singh Ramgarhia and he fought all battles alongside his brother. His Samadh is located at Village Thikriwal Goraya near Qadian, District Gurdaspur.

The family stood tall all through the making of the Sikh Empire and served the Sarkar Khalsa (reign of the Khalsa) of Maharaja Ranjit Singh with utmost loyalty, winning great honour and accolades. This period marked the presence of Sardar Jodh Singh, son of Jassa Singh Ramgarhia who fought the famous siege of Multan and completed construction of the Bunga Ramgarhia in the vicinity of Harmandir Sahib

The direct ancestor of the author Sardar Diwan Singh, son of Sardar Tara Singh, ruled over Baramullah in Jammu Kashmir on behalf of Sarkar Khalsa. The next generation, Sardar Mangal Singh  remained dedicated to the Sikh Empire and fought on the side of Hari Singh Nalwa in Peshawar.

The family, all through, remained deeply involved in the development and beautification of Amritsar and Harmandir Sahib for which it donated considerable wealth.

When the British took over Punjab, Sardar Mangal Singh was appointed manager of Harmandir Sahib and honorary Magistrate.  This service continued by succeeding generations who remained office bearers in the upkeep of the holy Temple. The author and his family, though no longer involved directly in the management and service of the temple, hold  their legacy to great regard as is very lucidly brought out in the book.

Despite its roots of a great civilisation Punjab has greatly erred in recording its glorious history. Probably, the Punjabi ancestors were too busy fighting and surviving to devote time to recording of history. Under these circumstances, reading a personalised record of a family as in “The Quest for the Past” brings forth a very poignant and sentimental emotion.

The author has, very gracefully, connected the history of the times with the story of his family which makes the book a very interesting read. Those who have interest in Sikh history would be able to relate with the events of the periods which have been covered in a special and enchanting manner. The book has number of old black and white pictures which arrest the interest of the reader.

Certain aspects like the Misl Sardars making alliances against each other even with the Mughals but getting together when a common threat was posed by the Afghans has been well elucidated in the book. One is left wondering as to how a Khalsa faced another Khalsa in such battles and later fought side by side.

The handing over of Bunga Ramgarhia by the family to the Shiromani Gurdwara Prabandhak Committee (SGPC) and the inability of the latter to maintain the heritage structure generates a feeling of dismay at the manner in which heritage has been replaced by marble due to the blinkered approach of those who have become guardians of our faith in the present times. Obviously, the disregard for history, legacy and culture continues to be prevalent in the Sikh/Punjabi thought process now more than ever. It seems that good sense has finally prevailed and the SGPC has approved renovation of Bunga Ramgarhia.

I  would take this opportunity to recommend to the author that, if feasible, the subsequent editions of the book see addition of socio-cultural aspects of those times – the dress, language, meetings marriage alliance, anecdotes  etc. Most importantly, the personality profile of the larger than life Sardar Jassa Singh Ramgarhia and other chiefs could be added .

Finally, my deep appreciation for the effort that the author has put in to record the history of his very illustrious family. It is something to be emulated by more from within the community. Punjab needs to understand its history to learn from the past and to build role models for the future generations.