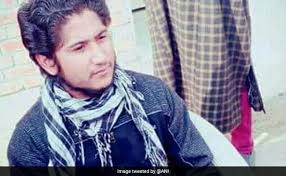 Naveed Jatt, a terrorist of Pakistani origin operating in Kashmir since 2012 has been killed! He came into the limelight in recent months due to his involvement in the gruesome murder of Shujaat Bukhari, a Kashmiri Muslim journalist of repute and Editor of a local newspaper of Jammu and Kashmir – Rising Kashmir. Bukhari was gunned down ruthlessly by three terrorists on 14, June, 2018 as he came out of his office; two of his security guards were also killed in the incident. Naveed Jatt was the leader of the terrorist team that carried out the murder.

Killing of any living being is considered to be a sin in Islam. Naveed Jatt committed this sin with impunity many times over! A day before the killing of Shujaat Bukhari, he was involved in an attack on a CRPF camp at Achabal in District Anantnag, Kashmir, in which two CRPF personnel were killed. As the top commander in Kashmir of the foreign terrorist organisation, Lashkar-e-Toiba (LeT), he spearheaded the abduction and killing of innocent Kashmiri youth on the pretext of their being police informers. Actually, the abduction and killing was carried out to intimidate and terrify the youth into following the path of terrorism. It was required to be done because the requisite numbers to sustain the terrorism in Kashmir was not forthcoming.

Naveed Jatt, therefore, was a blot on the noble religion that he professed to be fighting for and by killing him the security forces have done a great service to humanity and particularly to the people of Kashmir.

Naveed Jatt, sadly, knew no better since he pushed into this path by his own countrymen! He was indoctrinated into the so-called path of Jihad from his childhood itself by the Pakistani terror machinery. The son of an ex-Army man hailing from Multan, he was sent into a Madrasa for his education. He studied barely up to Class IV before being selected for training as a terrorist in the LeT facility at Dakhan, Pakistan. He was infiltrated into Kashmir in 2012 when he had barely stepped into his teens.

In 2012, Jatt was caught in a cordon laid out by an Indian Army unit, 62 Rashtriya Rifles. He was apprehended and sent into police custody from where he managed to escape in February this year. The daring escape from a hospital converted him into a hero. Buoyed by his newly created persona he indulged in a spate of killings and atrocities before being neutralised on 26, November, this year.

The counter terrorist operation in which Jatt was eliminated exhibited the seamless synergy with which security forces are functioning in Jammu and Kashmir. He was on the intelligence radar since his escape from custody and an elaborate dragnet was laid out to get him. He reportedly got caught in cordons earlier too but managed to escape with the assistance of locals. This time round the security forces reacted swiftly to the intelligence report and cordoned the house where he and his accomplices were hiding. The joint operation witnessed the Army going in for the cordon and search while the police and paramilitary forces remained deployed to ward off local involvement.

The counter-terrorist operation was carried out in a surgical manner, leading to the killing of Jatt and one more terrorist. Locals did try to disrupt the operation with heavy stone pelting but they could not do so. One CRPF soldier is reported to have sustained injuries in the stone pelting.

The Director General of Jammu and Kashmir Police, Dilbag Singh, has termed this a s a very successful operation and one amongst many this week that have led to the elimination of the top terrorist leadership in the Kashmir Valley. He has, very rightly, said that a case will be taken up with the Union Home Ministry to hand over the body of the terrorist to Pakistan from where he hails.  “Jihad in the name of Islam amounts to making a fool out of the people. It is Kashmiris who are being killed,’’ he added.

The Chief of Army Staff, General Bipin Rawat, has also expressed satisfaction at the manner in which counter terrorist operations are being conducted in Jammu and Kashmir, particularly the elimination of the top leadership which has a significant foreign signature. “We are achieving success in eliminating the top leadership of terrorists in Kashmir,” said the Army Chief.

A question is being raised about the continuing recruitment of locals into the fold of terrorism which is not allowing the numbers to fall down from a particular threshold despite the operational success being achieved. A big reason behind the recruitment is the likes of Naveed Jatt who use every possible means from indoctrination to outright intimidation of the target youth and their families for getting the required numbers. Experts and senior security personnel are of the opinion that sustained elimination of the top terrorist leadership that comprises mainly of foreign nationals will bring down the recruitment level drastically. “There is a decline in militancy recruitment and people are cooperating with us,” says DGP Dilbag Singh.

There is every reason to acknowledge and appreciate the exemplary manner in which the security forces in Jammu and Kashmir are working to rid the region of the curse of terrorism. The various agencies are working in close cooperation and with total synergy. The end result is incisive counter-terrorist operations carried out with minimum collateral damage. The assistance being given by the people and the free hand given by the government has also a big role to play. The end result is the elimination of scourges like Naveed Jatt who are causing immense suffering to innocent common people of the state.

The success of the security forces is a means to the end and not an end by itself. It will pay maximum dividends if the civil society of the state, its parents, elders, religious and political leaders, intelligentsia get together and motivate the youth to resist all efforts to indoctrinate them into the path of terrorism. Once a lid is put on terrorist recruitment all political, economic and social issues will automatically fall in place. One hopes to see a new dawn of peace and prosperity in Kashmir whose people have suffered more than their share of violence over the years.