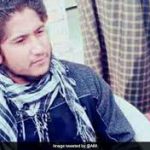 Jaibans Singh Naveed Jatt, a terrorist of Pakistani origin operating in Kashmir since 2012 has been killed! He came into the limelight in recent months due to his involvement in the gruesome murder of Shujaat Bukhari, a Kashmiri Muslim journalist of repute and Editor of a local newspaper of Jammu and Kashmir – Rising Kashmir. Bukhari was gunned down ruthlessly by three … END_OF_DOCUMENT_TOKEN_TO_BE_REPLACED