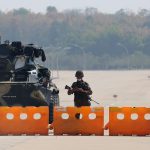 Col. Alok Mathur In early hours of 1 February, 2021, as Armoured Personnel Carriers (APCs) rolled out on the streets of Nay Pai Taw and Yangon in Myanmar, the military owned Myawwady Television channel announced that Myanmar was in a state of Emergency. The Republic of the Union of Myanmar slipped back into military rule in a coup against the democratically elected  government … END_OF_DOCUMENT_TOKEN_TO_BE_REPLACED