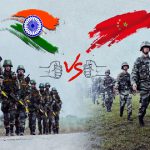 Jasbir Sarai The month of May last year (2020) witnessed a belligerent face-off between India and China along the Line of Actual Control (LAC) in eastern Ladakh. While tensions had been witnessed for quite some time, it was in early May that China moved in to make India a target of its "wolf warrior-diplomacy." The process started with press statements, harsh articles in its … END_OF_DOCUMENT_TOKEN_TO_BE_REPLACED