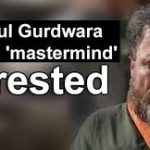 KABUL GURDWARA ATTACK Jaibans Singh There are a large number of Multi-media resources functioning across the world with the singular agenda of  creating a rift between the Hindu and Sikh communities by resorting to despicable propaganda based on  blatant lies and misinformation. One such organisation is 5K Broadcasting, a United Kingdom (UK) based … END_OF_DOCUMENT_TOKEN_TO_BE_REPLACED