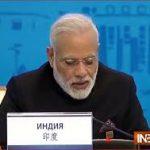 Mehtab Karan Singh “China, most likely, will seek to establish additional military bases in countries with which it has a longstanding friendly relationship and similar strategic interests, such as Pakistan….,” says a report by the Pentagon titled, “Military and Security Developments Involving the Peoples Republic of China, 2017” released on Tuesday, 06, June. The statement … END_OF_DOCUMENT_TOKEN_TO_BE_REPLACED