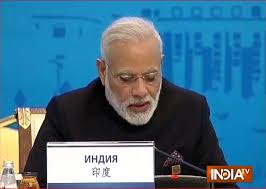 “China, most likely, will seek to establish additional military bases in countries with which it has a longstanding friendly relationship and similar strategic interests, such as Pakistan….,” says a report by the Pentagon titled, “Military and Security Developments Involving the Peoples Republic of China, 2017” released on Tuesday, 06, June.

The statement comes as an ominous warning for India since it hints towards a Chinese military base in Pakistan, over and above the considerable presence that the Peoples Liberation Army (PLA) already has over there.

It is notable that China has already opened a naval base in the Republic of Djibouti, a country located in the Horn of Africa which it says is designed “to help the navy and army further participate in United Nations Peace Keeping Operations (PKO), carry out escort missions…..and provide humanitarian assistance.”

It is quite typical of China to give such tongue in cheek justification for its expansionist designs but the world is not taken in by such explanations. The Pentagon report is quite emphatic in saying that by going in for such strategically placed bases, Beijing has demonstrated a desire to “project and sustain military power at greater distances from its mainland.”

China has, of course, dismissed the Pentagon report as, “Irresponsible remarks about China’s defense and development which disregard the facts.”

There are a number of factors in the report that India needs to be concerned about.

The first, over and above the proposed military base in Pakistan, is the massive scale of defense spending that China is resorting to. The report pegs Chinese defense Budget at a whopping 180 billion US Dollars (USD) for 2017, much higher than the official figure of 151.4 Billion USD. The Indian defense budget 2017-18 which stands at 53 Billion USD stands completely overshadowed.

It is said, and rightly so, that military and technological expansion in China is directed towards gaining parity with the United States (US). In the short term such parity is not feasible and China can pose no threat to the US mainland, but, China can definitely challenge US presence in the West Pacific and other areas geographically closer to it, like India.

India also has to contend with the close economic and strategic relations that are forging between its bête noir Pakistan and China. These are manifest by the China Pakistan Economic Corridor (CPEC) and the now possibility of China making a military base in Pakistan.

Even Pentagon is concerned about the rapid military build-up that is taking place in China so India has all the more reason to sit up and take notice. Even though defense experts courageously insist that India has a capability of fighting a two front war against Pakistan as well as China, the extreme challenge that would be posed by such a situation cannot be brushed aside.

Yet another area of concern is emergence of China as the fourth largest arms supplier in the world with more than 20 Billion USD in sales. This is critical for India since the equipment is being sold in the Indian neighbourhood to countries like Bangladesh and Myanmar.

Pakistan in any case has, for long, been a beneficiary of Chinese largesse in military hardware and continues to be so. In fact, ever since US has started cold shouldering Pakistan the country has reached out to China all the more and received a positive response.

It is common knowledge that China assisted Pakistan in nuclear proliferation and missile technology. Last year, Beijing had signed an agreement with Pakistan for the sale of eight submarines of which first four will be built in China, with the remaining four in Pakistan. Items like UAV’s, electronic hardware and fighter jets also form a part of the defense itinerary being given to Pakistan by China. Now talk of a military/naval base in the country will only add to the Chinese domination of Pakistan Army and thus pose an enhanced threat to India.

It is well known that China is going in for defense accretion with an economic purpose in mind. By not joining the Belt Road Initiative (BRI) India has irked China no end. This will give an added impetus to China to dominate the strategic space of the sub-continent much to the disadvantage of India.

India is firm on the need for global action to contain terrorism about which Prime Minister Modi speaks in all international forums. China blocking India’s bid to get Jaish-e-Mohammad chief Masood Azar declared a United Nations designated terrorist is a bone of contention between the two countries.

Chinese veto to India’s bid to become a member of the Nuclear Suppliers Group (NSG) is another sore point.

Earlier on June, 02, at St. Petersburg, Russia, while speaking on the need for China and India to cooperate on trade and investment despite the disputes Prime Minister Modi said, “It is true that we have a border dispute with China, but in the last forty years not a single bullet has been fired because of the border dispute.”

India is, very rightly, taking a soft diplomatic route to meet the challenge being posed by China. The idea is to send out a message that despite there being areas of serious conflict and disagreement, there are also many areas that offer space for mutually beneficial cooperation.

While wanting peace and working towards the same, India needs to remain aware of the Chinese strategic game plan and put in place counter measures. Building a minimum credible force to meet the enhanced threat is a single moot point in this direction. Diplomatic and bilateral efforts have to revolve around such a position of strength.

(Mehtab is a US based Engineer and a columnist)