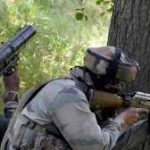 Jaibans Singh Much has been written and spoken about the terrorist attack on the Central Reserve Police Force (CRPF) convoy in Pampore, South Kashmir on June, 25.  Eight brave soldiers lost their lives in the attack while more than 20 were injured. In the post incident analysis, there are as many opinions as there are voices. The main issue that is being raised is - was the … END_OF_DOCUMENT_TOKEN_TO_BE_REPLACED