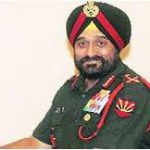 Jaibans Singh The PIL filed in the Supreme Court against the selection of Lt General Bikram Singh as the next Chief of the Indian Army has been dumped by the august Court where it belongs – in the dust bin. One wonders as to what prompted these senior citizens - a retired Admiral of the Indian Navy, a retired Chief Election Commissioner, a veteran journalist, a retired Lt … END_OF_DOCUMENT_TOKEN_TO_BE_REPLACED