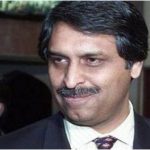 Jaibans Singh Jalil Abbas Jilani, the foreign secretary of Pakistan is expected at New Delhi to hold a meeting with his Indian counterpart, Ranjan Mathai, on July 4 and 5 as a part of the ongoing dialogue. The meeting was to be a precursor to talks between the foreign ministers of the two countries scheduled in the latter half of July in Islamabad. The said talks, however, has … END_OF_DOCUMENT_TOKEN_TO_BE_REPLACED