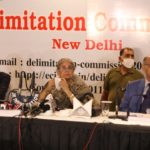 Sant Kumar Sharma In 2014, a Kashmir MLA led 81,720 voters, Jammu MLA 90,266 It was in last quarter of the year 2014 that assembly elections were held in Jammu and Kashmir were held last. No party could win a clear majority as has been the trend for past two decades since 2002 when the National Conference led by Farooq Abdullah had lost its majority. In 2008 also, no single … END_OF_DOCUMENT_TOKEN_TO_BE_REPLACED