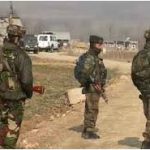 Jaibans Singh July, 03, 2012, the newly appointed foreign secretary of Pakistan, Jalil Abbas Jilani, arrived in India to hold a meeting with his Indian counterpart, Ranjan Mathai. A fact deliberately and tacitly downplayed was that this very person, in February 2003, when he was Chargé d'Affaires at the Pakistan High Commission in India was told to pack his bags and leave the … END_OF_DOCUMENT_TOKEN_TO_BE_REPLACED