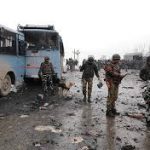 Jaibans Singh The terrorist attack on a CRPF convoy at Pulwama, Srinagar, is a cowardly act of mindless violence that has left the Nation aghast and the world horrified by its brutality and inhumanity. The Pakistan based terrorist organisation, Jaish-e-Mohammad (JeM), has claimed responsibility for the attack which is said to have been carried out by a local terrorist, Adil … END_OF_DOCUMENT_TOKEN_TO_BE_REPLACED