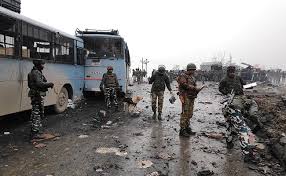 The terrorist attack on a CRPF convoy at Pulwama, Srinagar, is a cowardly act of mindless violence that has left the Nation aghast and the world horrified by its brutality and inhumanity. The Pakistan based terrorist organisation, Jaish-e-Mohammad (JeM), has claimed responsibility for the attack which is said to have been carried out by a local terrorist, Adil Ahmed Dar, who joined the organisation about a year back. Adil Ahmed Dar had declared that he had joined the Fidayeen (suicide) squad of JeM. It takes a lot of psychological conditioning to prepare a person as a suicide bomber. The capability of the JeM is carrying out this conditioning from across the border is something to be concerned about. The matter needs a detailed investigation to establish the modus operandi; the possibility of a double game where Adil has simply been used as a local face also cannot be ignored.

A suicide attack requires a lot of preparation including identification of the target, carrying out of research and reconnaissance, getting the necessary explosives and the vehicle etc. All of this requires detailed and professional planning that is beyond the capability of a novice terrorist or a single individual.  It is also notable here that the JeM is said to be instrumental for the recent grenade attack on a school in Pulwama in which 19 students were injured; it is also responsible for mobilisation of civilians for creating disruptions during counter-terrorist attacks. That the JeM has created such a capacity to strike at will in Pulwama also needs a deep study.

It is being said that there was an intelligence failure and a security lapse in assessing the danger being posed in movement of such big convoys of security forces. There is also talk of lack of synergy between security forces in the passage of intelligence. While one remains confident that the Intelligence network in Kashmir is strong, effective and synergised as is visible through the incisive and very successful joint counter-terrorist attacks being launched in the valley, the need for constant upgrading of facilities and capacities is well established. It needs to be acknowledged here that the enemy we are dealing with is equally determined and strives to finds ways to break our network!

The JeM has gone overboard to prove that the suicide attack has a local signature, but the fact that it is involved in nurturing terrorism in Kashmir has also been established. This is enough reason for the international community to move towards declaring the organisation and its chief, Masood Azhar, as a terrorist and prevail upon Pakistan to take action against him. The United States has come in support of India immediately after the incident took place.  “The United States calls on Pakistan to end immediately the support and safe haven provided to all terrorist groups operating on its soil, whose only goal is to sow chaos, violence, and terror in the region,” said a White House statement. This is a positive indication that needs to be appreciated by India.

Along with putting pressure on Pakistan the Government of India needs to take strong action to stop the process of radicalisation that is in place across the Kashmir valley through paid agents of the Pakistan based terrorist machinery.  The Hurriyat should not be allowed to implement its abhorrent protest calendars. Its inability to condemn this dastardly terrorist act should be taken as a proof of its anti-India sentiments and necessary legal action initiated.

The most urgent requirement of the moment, however, is for the nation to stand steadfast behind its security forces in this moment of grief. The families of those killed need to be given succour and looked after. This set back provides no reason for doubting the capability and capacity of the security forces to deal with the situation in Kashmir, on the other hand, they need to be assured of the Nations faith in their ability and helped to overcome the huge loss of their comrades.

The media should desist from finding fault in the operational procedures. Sensationalism should be avoided, especially the calling of Pakistani commentators on Television shows. There is a need to exhibit sensitivity for the soldiers who have lost their lives and for their families.

The Prime Minister has condemned the attack and assured that the sacrifice of the soldiers will not go in vain.  The Cabinet Committee of Security (CCS) the apex national body on security issues has already held a meeting to assess the situation and come up with an action plan. A team of the National Investigation Agency (NIA) has been dispatched for this purpose; it will undoubtedly boost the internal investigation process and come up with suggestions on what is required to be done to strengthen security. Undoubtedly, the Union Home Minister and National Security Advisor (NSA) will interact with the commanders on ground and provide them all support that they need to face the emerging security challenges. The government should be given the opportunity to react in the most appropriate manner.

One also expects that the political parties in Kashmir, especially the local mainstream entities like the National Conference and the Peoples Democratic Party (PDP) will mobilise their cadre towards isolating their people from the machinations of the enemy. It is notable here that such parties have been speaking about the inconvenience being caused to civilians due to convoy movement, it is such pressures on the security forces that leads to situations of the type that we have in hand now.

It is also expected that all national political parties will leave their personal vendettas and agendas behind and join as one to meet the challenge posed by the enemy through the medium of this attack. This is not the time to make political brownie points through a blame game. It is the time to remain united in a strong response and support the government in its endeavours.

That our soldiers are the best in the world and not afraid to give their lives for the country is amply proved time and again, it is now up to the Nation to stand up for them.

(Jaibans Singh is a reputed security analyst, columnist and commentator)