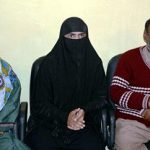 Jaibans Singh Reports suggest that the “Handwara girl” has come out in a “Burqa” (traditional dress in which the face and body of a woman is fully covered) to say that her earlier statement, on video and in front of a chief judicial magistrate, exonerating the Indian army of all blame in an allegation of her molestation in mid-April was made under pressure of the police. This … END_OF_DOCUMENT_TOKEN_TO_BE_REPLACED