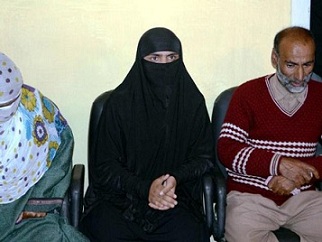 Reports suggest that the “Handwara girl” has come out in a “Burqa” (traditional dress in which the face and body of a woman is fully covered) to say that her earlier statement, on video and in front of a chief judicial magistrate, exonerating the Indian army of all blame in an allegation of her molestation in mid-April was made under pressure of the police.

This unbelievable and shocking turn of events clearly indicates the level to which the divisive forces have penetrated the society in Kashmir, the influence that they wield and the extent to which they can go to further their wicked, self serving interests.

Less than a month back, the separatist and divisive elements made a concerted attempt to discredit the Indian Army.  The plan was to use a girl as a tool to plant allegations of molestation on the army.

Accordingly, the girl in question was accosted by a local boy near an army post while using a washroom and then a hue and cry was raised that an army person had molested her.  In no time a crowd gathered out of nowhere and started shouting slogans and pelting stones on a small detachment of army troops located there.

The plan fell flat in no time because the girl, most courageously, refuted the allegation. In a video recorded statement that went viral on social media and You Tube, she clarified that as she came out of a washroom a boy tried to grab her handbag. While she was engaged in a scuffle with him, some more young boys reached the spot and started raising slogans against the army.  The girl later upheld her statement in front of a magistrate and thus negated the plan in its entirety.

The separatist and divisive forces stood exposed for having engineered the whole incident with the intention of causing harm to the reputation of the army. They were looked upon with disgust and contempt the world over.

Any normal person or organisation would not be able to pick up its head after such shame being heaped upon it, but the separatists and their stooges have a very thick skin. With no thought to their eternal humiliation they set out to find ways and means to turn around the situation.

The first action in their agenda was, quite predictably, to get the girl away from the protection of the police and the government.

Organisations like the Jammu Kashmir Coalition for Civil Society went into overdrive to get the girl out of the protection being provided by the Police. Judicial processes were activated to pressurise the administration. Media was fed with minute by minute information of the most virulent and biased nature.

Blatant attempts were made to create a wedge between the police and the army by clever use of legalese.

The provisions of constitutional processes and rule of law finally paved the way for these unholy forces and they were successful in wresting the girl away from the protection of the police and the administration.

Once out and exposed, pressure from these very powerful forces finally broke her courage. Such a consequence is neither surprising nor unexpected. The girl had no choice but to succumb, given her vulnerable position and poor family background.

A logical person studying the turn of events would be quite amazed by the fact that the girl who had a modern demeanour just a few days back was now coming out in a Burqa. It is a clear indication of the extent to which she has been pressurised and indoctrinated.

“They (The Police) told me that I should not say this to anyone because it would put my life and my family’s life in danger,” said the girl in her latest statement made in a press conference organised by the Jammu Kashmir Coalition for Civil Society.

A logical question that can be asked here is – why would the police be ready to kill or even harm an innocent family simply to protect some army soldier?  It simply does not stand to reason.

The danger to the family, in fact, is from the vested interests which are now exploiting her. The more the poor girl plays in their hands the more vulnerable she will become.

Formation of the government under Mehbooba Mufti, the speed at which the development agenda is now being pursued and the success that the security forces are achieving in intelligence based surgical counter-terrorism operations have come as a big blow to the inimical forces in the Kashmir valley. They are now leaving no stone unturned in their attempt to reverse the situation.

The only viable option that they have is to try and turn public sentiment against the government and its security forces, the Handwara incident was engineered with this aim in mind and the recent statement taken from the girl is aimed to this end only.

The sheer deviousness and disregard for human values with which the separatist elements of Kashmir can manipulate human beings and situations to their advantage would leave any normal person absolutely shocked and astounded.

The disrupters in Kashmir have thrown humanity and values to the dogs in pursuit of their goals. They have no qualms in ruining the life of am innocent, truthful, courageous girl if by so doing they can benefit and satisfy their masters sitting across the border.

No right thinking person is going to get swayed by the duplicity of the inimical forces.  This infantile attempt by the separatist and divisive elements has further exposed their inherent maliciousness.

One cannot but sympathise with the Handwara girl who is suffering so much trauma for no fault of hers. The authorities should not have removed her protection. It would have been best in the very first instance to move her and her family out of the valley. The government should now realise the danger that the girl and her family are facing and move post haste to provide protection to her.