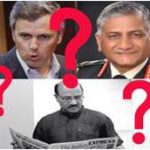 Jaibans Singh Preposterous is an appropriate word to describe the controversy that has erupted with regard to the intelligence unit, Technical Support Division (TSD) of the Indian Army, said to have been raised by the former Army Chief, General VK Singh, and used by him for all sorts of malpractices. Galling is a word that can describe the media opportunism that has created … END_OF_DOCUMENT_TOKEN_TO_BE_REPLACED