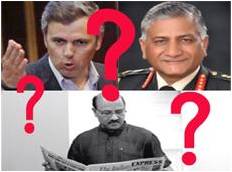 Preposterous is an appropriate word to describe the controversy that has erupted with regard to the intelligence unit, Technical Support Division (TSD) of the Indian Army, said to have been raised by the former Army Chief, General VK Singh, and used by him for all sorts of malpractices. Galling is a word that can describe the media opportunism that has created this controversy in the first case. Opportunistic is an appropriate word to use for the manner in which the National Conference is trying to exploit the information for parochial political gains. Obnoxious is an appropriate word to describe the manner in which General VK Singh has reacted the controversy and quoted half truths to give an impression of wrong doings in the relationship between the Army and the civil administration in Jammu and Kashmir.

What is most surprising is that it is always the Indian Express that breaks stories concerning the supposed evils perpetrated by General VK Singh. In this instance also Indian Express has, providentially, got hold of the report on the TSD within days of it having been submitted to the Ministry of Defence. An inquiry needs to be carried out to identify the source of the leak in this grave matter concerning national security.

It is common knowledge that a Board of Officers (BOO) had been convened by the Army Headquarter at the behest of the Ministry of Defence to prepare a report on the TSD. What is new in the information now leaked out is that the Army in its report has recommended involvement of an outside agency (CBI) to further inquire into the findings of the BOO. It is not understood as to why the BOO would give any recommendation to the Ministry with respect to the disposal of its report. The job of a BOO is limited to providing the facts of the case; whether a further inquiry is required or not should logically be the prerogative of the Government of India (GOI).

The second new aspect leaked out is the alleged involvement of the TSD in efforts to topple the government of Jammu and Kashmir. The allegations suggest that the Indian Army paid a meagre sum of Rs1.9 crore to the Agriculture Minister, Ghulam Hasan Mir, to bring about this “Coup”. Mir is chairman of a small political outfit –the Democratic Party Nationalist, and said to be a Congress protégé in the coalition. How he would have been able to pull off a thing of this nature is anybody’s guess

The National Conference lost no time in donning the mantle of judge, jury and prosecutor and launched an all out campaign to derive as much political mileage out of the issue as possible. While Chief Minister Omar Abdullah maintained a studied silence he did nothing to control his party cadre who went on a rampage making insinuating and provocative statements. Salvoes were fired by Mustafa Kamal, the uncle of the Chief Minister whose only job is to create controversies. He termed the Indian Army and the Intelligence Bureau as avowed enemies of Kashmir and Ghulam Hasan Mir as the ‘yes-man’ of the Army. Kamal found ample support in his ranting from another National Conference Minister, Ali Mohammad Sagar. The icing on the cake goes to one Devinder Rana, a man whose only claim to fame is being a friend and business associate of Omar Abdullah. He had the gumption of talking of national security issues with people at a Block level meeting. It is absolutely ludicrous and astounding to see the levels that wannabe politicians can go to please their masters.

There is every indication that the matter will end up as a damp squib. Jammu and Kashmir Pradesh Congress President, Saifuddin Soz has given a virtual clean chit to Ghulam Hassan Mir. “There is no charge-sheet against him so far. People are demanding probe. Even Mir has said let there be a probe,” Soz has stated. Therefore, the National Conference after all the mudslinging will be left with egg on its face.

It is important to see whether there is any merit in these allegations or not. The National Conference alleges that the Machil incident was engineered by the Army to oust the incumbent government. It may be noted that the Machil incident took place in April, 2010; the agitations that could have derailed the government took place much after that from July 2010 onwards. They were triggered by the death of Tufail Matoo and were the result of mismanagement by Omar Abdullah. In fact it was the army that came to the rescue of the beleaguered government by holding flag marches and getting the situation under control.

Second, if the National Conference was in the know of and did not approve of Ghulam Hasan Mir’s association with the Army as emphatically stated by Mustafa Kamal then why was he not removed from office? The manner in which the media build up has been orchestrated at this stage reeks of political opportunism.

Third and most important is the aspect of motive, why on earth would the Army wish to destabllise the Government of Jammu and Kashmir unless, of course, it received specific direction for the GOI. If National Conference has any questions they should be directed towards its coalition partner and not the Army.

Even as the matter was getting into perspective General VK Singh, buoyed by the media attention that he is getting set another cat amongst the pigeons by insinuating that the “Army pays money to all ministers in Jammu and Kashmir to perform jobs for maintaining peace and harmony in the State.” The distinguished army veteran allowed the media to chew his statement and then clarified, and rightly so, that the money is not given as bribes but for certain activities under Operation Sadbhavna. Operation Sadbhavna is a welfare initiative undertaken by the Army in both Jammu and Kashmir and the North-East with the specific purpose of ameliorating the troubles faced by the common people due to the cult of terrorism and in the process winning their hearts and minds. It is a participatory initiative where distinguished civilian are involved – not only Minister’s but grass roots functionaries like Panches, Sarpanches and even Government officials like Deputy Commissioners, Block Development Officers etc. This initiative has the express sanction of the GOI, funds are allotted under approved heads and audited by competent authorities; activities are carried out in the public domain with no covert dealing whatsoever. The General should have given these clarifications in the first case to avoid the controversy that has erupted later.

It is very sad to see responsible people politicising the sensitive State of Jammu and Kashmir for personal gains without a thought to the effect that such actions would have on the trouble torn region. It is all the more unfortunate to note that those who are creating this havoc belong to the very segment of society on whose shoulders rests the responsibility to maintain the honour, integrity and dignity of the country. To this extent, Shekhar Gupta, the Chief Editor of Indian Express, Omar Abdullah, the Chief Minister of Jammu and Kashmir and most of all General VK Singh former Chief of the Indian Army cannot be excused for their blatant disregard to principles of nationalism.