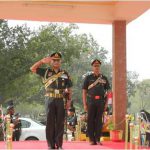 Jaibans Singh  General VK Singh, Chief of Army Staff (COAS), Indian Army, visited Skinner’s Horse at Meerut Military Station on March, 21 and reviewed a ceremonial mounted parade of the regiment. The COAS is Honorary Colonel of Skinner’s Horse in view of his historic association with the unit where his ancestors served with distinction during the period of World War I and … END_OF_DOCUMENT_TOKEN_TO_BE_REPLACED