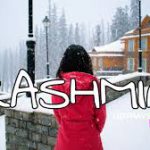 Onkareshwar Pandey This winter is likely to be particularly harsh for the Union Territory of Jammu and Kashmir. The coldest night of the season was recorded as on 9 December, the cold wave has not relented since then with the minimum temperature continuing to hover several degrees below the season’s average. The National Highway s already witnessed closure for the last few … END_OF_DOCUMENT_TOKEN_TO_BE_REPLACED