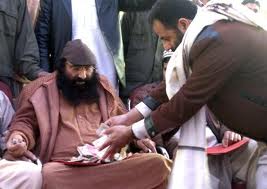 Pakistan’s Inter Services Intelligence (ISI), as a part of its road map for fermenting terrorist activity in Jammu and Kashmir, misguides and indoctrinates Kashmiri youth into the fold of terrorism. These indoctrinated youth are sent to Pakistan Occupied Kashmir (POK) for training before being re-inducted into Jammu and Kashmir as indigenous terrorists. The ISI required this indigenous face to give a home grown veneer to its evil plans. The terrorist pool thus created is divided into a number of outfits to give an impression that many organisations are involved in the terror movement.

Syed Salah-ud-Din was one of the first to be indoctrinated and sent to POK. He was appointed commander of the biggest indigenous terrorist outfit, the Hizbul Mujahideen (HM). In order to further enhance his stature, the United Jihad Council (UJC) was created and he was appointed its chairman. In actuality, it is the ISI which was pulling the strings. Salah-ud-Din was and remains a mere puppet in a much larger game plan of the agency; he is the mask that has been created to hide the face; he is nothing more than an employee of the ISI.

Salah-ud-Din seems to be a worried man these days; his well paying and comfortable job seems to be in jeopardy. The HM is in doldrums with a large portion of its cadre having deserted the outfit over the years and the rest being steadily eliminated by the security forces. In mid-September, this year our worthy chairman received a major jolt due to the arrest, in Kashmir, of his long time friend and accomplice Mehraj-ud-Din Wani. Wani, the longest surviving terrorist of Kashmir, was among the first few to get into the ISI fold along with the likes of Salah-ud-Din, Hamid Sheikh and Yasin Malik. He had been sent to Kashmir via Nepal to resurrect the de-motivated remnants of the terrorist cadre by organising assassinations of top political leaders. He was arrested by the Police due to credible intelligence provided by his own supporters. The second big jolt for Salah-ud-Din came with the killing of five HM terrorists by the security forces in the beginning of October. Salah-ud-Din himself admitted that the killing of this top group was a “biggest setback” for him; however, he did not relent from reassuring his illusionary organisation that the elimination would produce “thousands of loyalists.” From where and how is something that he did not elaborate upon.

In the aftermath of a series of such setbacks Salah-ud Din has been left with no option but to talk big and talk loud in order to make his presence felt. This is the latest duty given to him by his employers to keep his job intact and he seems to be doing it with utmost diligence. For delivering his message, his mentors have placed at his disposal a massive media infrastructure comprising of news agencies, captive newspapers, websites, radio channels, uploads on you tube etc; you name it and he has it. All of these agencies communicate his deceitful pearls of wisdom and those of his associates in Kashmir regularly and in the most professional manner.

What Salah-ud Din speaks is scripted to the last coma and full stop by his masters; his given agenda is to motivate Kashmiri youth to once again respond to the call of terror; for this he spouts venom against the Indian state, talks of human rights violations and suppression of the common man and extols the sacrifices of those like Muhammad Ashraf Dar whom he has got killed on the mantle of his ambition while he himself enjoys a healthy life under luxurious conditions. He gives an impression that his word holds weight in international circles and most confidently demands tripartite talks on the Kashmir issue under the ambit of the UN resolutions.

All that he says is, of course, absolute thrash but this fact is not known to the common man and many villagers get impressed by his words and persona. “The day is not far when the people of Kashmir would achieve their cherished goal of freedom,” he says with great fervour. The ground reality is that his prophetic words have already seen the light of day, the people of Kashmir have already achieved their cherished goal of freedom after giving an emphatic thumbs down to the cult of terrorism, but there are people who do not realise this and it is these people whom Salah-ud-Din is now targeting. It would not be out of place to suggest the Syed Salah-ud-Din as a commander of HM has reached a dead end. He has now launched a new career as a rabble rouser and it is for this that the ISI is continuing with his luxurious perks, big houses, good food, iron clad security and what not. He has become the lynch pin of the ISI propaganda plan to reinvent terrorism in Kashmir.

The Indian authorities have, unfortunately, shut their eyes and ears to the slander which is being spread right under their noses; our stagnant bureaucracy is simply twiddling its thumbs and passing the buck while inimical forces rule the media roost. The Indian state also needs to rise to the media challenge that people like Salah-ud-Din are posing to the nation. If they are allowed to go unchecked as is happening presently, Kashmiri youth will once again become prey to their indoctrination. It should never be forgotten that a lie told many times over gets is finally looked upon as a truth and this is what the propaganda machine of Pakistan is now attempting with the assistance of the likes of Salah-ud-Din. It is now up to the Indian government to decide whether it will act now or allow a veritable disaster to take firm roots.