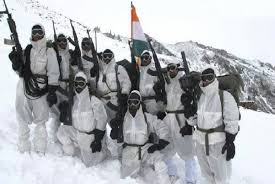 “I am proud of all Army personnel serving in Siachen who are leaving no stone unturned to defend our motherland. I am also proud of their parents who have sent their children to serve the nation by joining the Armed forces. I will personally send a thank you note to them,” said  Defence Minister Rajnath Singh, on June, 2019, during his maiden visit Siachen, the highest militarised zone in the world. The Defence Minister echoed the sentiments of the entire nation that remains in awe of the gallant Siachen Warriors ever since the launch of Operation Meghdoot on 13 April 1984 when, in an unimaginable feat of grit and bravery, the Indian Army gained control over the dominating heights of the Saltoro ridge, Sia La and Bilafond La, in a short period of time. Since then, Siachen has witnessed a saga of unparalleled valour in the face of a belligerent enemy, arduous terrain and challenging climatic conditions.

Siachen Day, celebrated on 13, April, every year, honours all the brave Indian soldiers who have, over the years, successfully thwarted evil designs of the enemy in Siachen. It was marked this year with reverence and  remembrance of the gallant martyrs by a grateful nation, in a solemn and controlled manner. The Leh based Fire & Fury Corps of the Indian Army in whose Area of Responsibility (AOR)  the “highest battlefield in the world” is located held a somber Wreath Laying Ceremony.

Pakistan has been consistently pressurising India to demilitarise the Glacier since it is in a very weak position over there. Earlier in 2012, Pakistan had lost 130 men in a massive avalanche at Gayari, its post nearest to the Glacier. At that stage, instead of adopting a pragmatic approach, the then Pakistan Army Chief, General Kayani , reiterated the Pakistani position that it was India that started the dispute in 1984. Pakistan resorts to consistent lobbying to bring down International pressure in this regard on the Indian leadership.

Successive governments in India have not been averse to the idea of demilitarisation, On June, 12, 2005, while on a visit to the Glacier, then Indian Prime Minister Dr. Manmohan Singh said, “Now the time has come that we make efforts that this battlefield is converted into a peace mountain.”

For a movement forward, Indian has laid down a few pre-conditions.  The most prominent among these is authentication on a map of the Actual Ground Position Line (AGPL) along which troops are presently deployed. Pakistan is insisting on a withdrawal to the positions held in 1984, which is clearly not acceptable to India. India is well aware that, having achieved the first step, Pakistan will declare the region as a disputed territory. After this, a Jihadi intrusion to fructify expansionist designs  will then be resorted, regardless of the assurances given.

Control over the area would constitute a major strategic achievement for Pakistan as it would breathe down the Indian Army’s positions in Ladakh while denying India the capability to monitor the sensitive Pakistan-China axis. The matter has taken an even more critical turn for India now that Pakistan has practically ceding to China the whole of Gilgit-Baltistan and especially the Shaksgam Valley. Due to this illegal deed, China is in a position to bridge the Aksai Chin-Gilgit-Baltistan gap and dominate the Karakoram pass.

India cannot allow such a strategic misadventure to take place. Thus, holding of the Siachen Glacier is crucial for India. Prime Minister Narendra Modi celebrated the Diwali of 2014 with the soldiers at Siachen. He reiterated the commitment of his government to uphold the position that the Indian Army has maintained with so much sacrifice.

In October, 2019, Defence Minister Rajnath Singh announced opening of the Glacier from Siachen base camp to Kumar Post for tourism purposes. Pakistan responded quickly by terming the region a  disputed territory. “India forcibly occupied Siachen Glacier and it is a disputed area. How can India open it for tourism?” said Pakistan Foreign Office Spokesperson Muhammad Faisal

In November, 2019, six people (Four soldiers and two porters) lost their life in an avalanche, triggering the usual media hype for demilitarisation of the region.  It is admitted that India has many weather related casualties in Siachen. Better procedures and precautionary process, however, have reduced the casualties to a great extent. Now advanced technology is being used to make the life of soldiers posted over there a little easier. A massive plan to modernise all roads and construct new ones leading to the Siachen glacier, has been launched in the Ladakh sector for faster movement of troops and equipment.

Adverse climatic conditions or any other form of hardship will not deter Pakistan from covetously eying Siachen. Now even China would be equally interested to dislodge the Indian deployment over there. Such inimical designs make it imperative for India to steadfastly man the heights notwithstanding the cost and the difficulty.

For India, expenditure and effort to regain the Saltoro Ridge, if demilitarised, would escalate as a geometric/logarithmic progression. In fact, cost escalation for India would begin the moment any unfortunate decision to demilitarise from Siachen is taken. This will happen in terms of building a new line of defence further down which will require more infrastructure and troops involving prohibitive expenditure. As and when the conflict escalates, the money saved will go down the gutter in nanoseconds. A much larger number of soldiers will be called upon to sacrifice their lives than the few who are becoming unfortunate victims of the weather presently. More dangerous is the fact that this may well trigger a scary sub-continental conflict. Hence, domination of Saltoro Ridge by India is a strategic imperative since

(Jasbir Sarai is a strategic analyst and columnist)