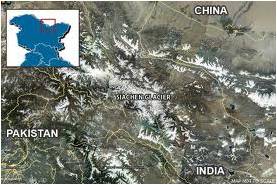 Siachen will come up in the secretary level talks between India and Pakistan scheduled on 11-12, June, 2012. The last parley was held almost a year back on May, 30, 2011; at that stage, the two countries failed to agree on the modalities for demilitarisation while agreeing “in-principle” to the need to demilitarise. The talks in May 2011 were held after a gap of three years.

Post the devastating avalanche at Gayari in Pakistan Occupied Kashmir, Pakistan has built a sustained campaign for taking forward the process of demilitarisation. Initial conciliatory statements by Pakistan army chief General Kayani were followed by a sustained media blitz aimed at pressurising the Indian side into toeing the Pakistani line. Recently, Choudhary Ahmed Mukhtar, the erstwhile defence minister of Pakistan claimed that the armies of both countries are the biggest hurdles in resolving the issue. In the next breath he declared General Kayani as the best bet for reaching a solution. By so saying, the Hon’ble minister has left only the Indian army as the identifiable hurdle in the talks. This is propaganda at its best.

The talks will probably be a case of old wine in a new bottle since nothing unique has happened between India and Pakistan since the last parley. The most significant change, however, is on the China front wherein the country’s increasing presence in the Pakistani held India territory of Gilgit-Baltistan is a cause for concern. This has happened in addition to Pakistan’s unilateral and illegal conceding of the Shaksgam region to China way back in 1963. Now if we vacate the Saltoro Ridge, China will gleefully exploit the attendant free run north of the vacated areas and will definitely put the new found bonanza to strategic use; all the more reason for India to move ahead cautiously on demilitarisation.

The Indian media, surprisingly, is in hyper mode over the issue; there are as many opinions as there are voices. Some of these reek of a motive to create pressure in New Delhi. Some are suggesting that, at the outset, the operation was a misadventure and a blunder committed by the then military commanders on ground, Lieutenant General ML Chibber and Lieutenant General PN Hoon, something that General Chibber is said to nave admitted to at a later stage; others say that a come down on its position on Siachen by India would positively impact the confidence building measures; some more look at the issue as a ticket for Prime Minister Manmohan Singh to the Nobel peace prize.

This media hype, especially the reference to historical aspects is misleading given the fact that the situation has constantly evolved and many astute military minds have applied themselves to create the circumstances as they exist on ground. To discuss it against the historic template would be fatuous. A retired General who commanded 3 Division almost a decade after the initial occupation in 1984 rues the fact that articles on the subject are being written by those who have neither seen the area in detail nor possess adequate knowledge of higher direction of war. He feels that there are strong reasons for India to be satisfied with the operational situation in Siachen, having dominated the Pakistani positions and having mastered the art of countering the vagaries of high altitude weather.

At present, all Pakistani positions west of Gayari are cut off from their supply route. The entire middle of the Pakistani defence line below the Saltoro ridge has been effectively hollowed out. This implies that the Pakistani posture on the glacier is at its weakest. With Gayari gone, the Pakistani logistical advantage in the Saltoro range is gone. Yet, quite incredibly, there are some Indian analysts who feel like suggesting the possibility of Pakistan joining up with China to cut of Siachen in a pincer east to west movement.

There is one more important aspect that needs to be kept constantly in focus while dealing with Siachen. Avalanche or no avalanche, hollowness or no hollowness, diplomacy or no diplomacy, Pakistan will always look upon Indian presence of the Saltoro ridge as a forcibly occupation. No agreement will be strong enough to deter Pakistan from attempting, at some point in time, to restore what they perceive to be a national shame. Pakistan is not averse to building international pressure against India on the subject, especially so, by firing the gun from the shoulder of its trusted ally, the United States or by involving China as a partner in the dispute. It is, presently, actively pursuing both options.

Indian expenditure and effort to regain the Saltoro Ridge, if demilitarised, would escalate as a geometric/logarithmic progression. In fact cost escalation for Indian will begin the moment any unfortunate decision to demilitarise from Siachen is taken. This will happen in terms of building a new line of defence further down which will require more infrastructure and troops involving prohibitive expenditure. As and when the conflict escalates, the money saved over the years will go down the gutter in nanoseconds. A much larger number of soldiers will be called upon to sacrifice their lives than the few who are becoming unfortunate victims of the weather presently. More dangerous is the fact that this may well trigger a scary sub-continental conflict. A risk of this nature cannot be taken simply to resurrect the sagging career and image of the likes of Kayani and Zardari.

In all matters concerning territorial dispute India’s sole objective should remain the sanctity of the motherland which cannot be bartered it away. Pakistan has been proposing that both sides should withdraw to positions that existed prior to the occupation of the Saltoro Ridge; this, of course, cannot be accepted at all. Beyond this, Indian diplomats, while dealing with Pakistan, must always keep in mind the mistakes of returning Hajipir pass.