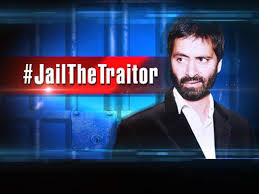 As the Kashmir valley struggles to grapple with an unprecedented and highly adverse situation of floods and inundation the separatists are adopting an appalling and despicable posture. Among the array of shameful activities being engineered by them to derail the rescue and relief process is an abominable attempt by Yasin Malik to “capture and loot” a rescue boat in order to show that he is totally involved in the rescue operations. Earlier, he was seen interfering with the relief process of the Indian army by disallowing some sick women from embarking to safety in an army boat. Even more ludicrous is the call by Syed Ali Shah Geelani to the Pakistan army to come to the aid of the Kashmiri people. Paid stooges of the separatists have been throwing stones at Helicopters undertaking rescue effort.

It seems that the separatists have lost all sense of humanity in their tryst to discredit the selfless involvement of the Indian Army in the rescue and relief process. This atrocious and brutal behaviour has elicited the highest condemnation worldwide. The media is so disgusted that it does not even wish to speak of the insensitivity lest it takes away focus from the all important relief work in hand.

The separatists are losing no opportunity to highlight the lack of response of the state government. After the shameful episode of trying to capture the boat Yasin Malik used the attendant media opportunity to deride the government.

This is not the time to rake up such issues; any lapse on the part of the government can be considered later, inquiries can be held, responsibilities fixed and disciplinary action taken according to law. For the moment, no thought should be given to such negativity and all energy needs to be diverted towards controlling and then reversing the terrible situation.

While the separatists go about carrying their negativity on their shoulders there are endless stories of courageous initiative at the individual level. Many civilians have been participating in the rescue operations voluntarily and giving a helping hand with complete disregard to their own safety; their efforts have resulted in saving of precious lives, especially of old people and children. It is such spirit in adversity that keeps humanity alive and it is this spirit which will help in overcoming the hard times ahead.

The whole world has witnessed and appreciated the effort put in by go various government agencies in the rescue operations. Whether this rescue team comprised of the state government or the army or the national disaster management force or the paramilitary forces or the local Shikara operators or the civilian voluntary relief workers does not matter at all. What matters is that those who could do something did it wholeheartedly for their fellow citizens.

What is of significance is that all agencies are working seamlessly, shoulder to shoulder with no thought of any personal gains. It is only the spirit of humanity that is prevailing. When the army is not pointing fingers at anybody nor looking for praise then why should anybody else adversely comment on the situation.

It is a fact that the army took a leadership role; this was because the state government was rendered helpless since its own capital city, Srinagar was stuck in the middle of the calamity. The effort put in by Chief Minister Omar Abdullah deserves the highest approbation; he has been available day and night and has taken on the flak like a true leader. He has been forthcoming in appreciating the effort put in by other national agencies and civilians; by so doing he has created the bond required to go through these testing times.

There is also a lot of talk of the army doing all this to “win hearts and minds” of the local population. Nothing could be further from the truth. The army already shares a unique bond of love and mutual respect with the people having over come many challenges in the past. One should not forget the debilitating days of foreign sponsored terrorism, the snow tsunami and earthquake of 2005 and the many times that the valley has remained cut off due to heavy snow. In all such times the soldier and the Kashmiri people have stood up for each other. This time is no different. The bond between the people and the army is routinely subject to adversarial propaganda by the separatists as is the case now also.

There is no point is narrating statistics or trying to put in words the scale of the problems being faced by the flood hit region; it would suffice to say that the affected people and the rescuers have fought and continue to fight the calamity with some divine strength; God has given the people and the government agencies involved in the rescue the courage, the will and the determination to meet the catastrophe.

The problem is far from being under control but if the Nation and the people can maintain even a small percentage of the courage, fortitude and determination shown in the last two weeks then everything will be normal sooner than expected and the Nation will emerge stronger than before.

The separatists have been exposed and shamed forever. They can resurrect their lost reputation by looking beyond politics, overcoming fear of their foreign masters and putting in their penny’s worth in the rescue and relief operations with all honesty. If this is not feasible they can, at least, can remain indoors and do nothing at all. In case they persist with their evil, propagandist activities the state government should not hesitate from putting them behind bars.