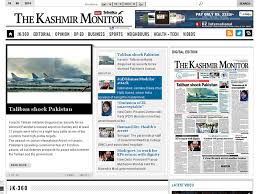 Two journalists from Kashmir, Shamir Showkin Lone and Muhammad Younis, have written a piece ‘Reverse Swing’, which was published on February 29 in Kashmir Monitor, a Kashmir based English newspaper.

In this article, the authors have attempted to establish that anti-army and anti-national sentiment is on the upswing in the Kashmir Valley.

As a backdrop, they have specifically referred to a counter-terrorist operation conducted by the security forces at Kakapora in Kashmir on February 14 and a few others before that.

Their Kakapora narrative refers to a young boy Shafqat Ahmed, who is said to have instigated his cricket playing friends to leave the sport and go to the encounter site to support the terrorists. It is claimed that the boys were shamefaced into leaving their game and they proceeded to the encounter site, but the encounter was over by the time they reached there.

It is thus established that the young boys did not ultimately interfere in the counter-terrorist operation since it had culminated before they reached the location. As such, they cannot be held guilty of a crime or misdemeanour. This is appreciable sleight of hand writing by the authors, wherein, a story has been woven around an activity that has not taken place.

Secondly, the identity of Shafqat Ahmed has not been established nor has it been clarified whether it was his real name or a pseudonym to protect his identity in accordance with journalistic norms. The authors have thus given the person authenticity while not revealing his identity.

The point is, if there is a Shafqat Ahmed, who has taken this step then he needs to be investigated by the police for possible links with terrorists. He might be an over ground worker of the terrorists. It is, therefore, incumbent for the authors to make public his identity on grounds of national security.

The authors have attempted to establish that according to Shafqat Ahmed, “militants were engaged in a final battle with their enemy, trapped inside a house……..”

There are some more troublesome derivatives of the article. Is it not bizarre that young boys can play cricket in one instance and switch over to a hate filled activity in the very next instance? In case something like this happened than the coercion angle needs to be examined in detail. One is forced to ponder as to how ‘willing’ was this ‘show of solidarity’.

The authors wish to give an impression that now terrorists have stopped targeting civilians as a result of which they are regaining the sympathy of the locals. This line of thought is an insult to those who lost their families, property and self-respect in the hands of evil terrorists and those who have for decades actively supported security forces in the successful fight against terrorism.

The authors talk of, “Young men who take part in these protests were born in the last twenty-five years. They were born when an encounter would be underway in a neighbourhood.” They do not talk about the parents of the young men who saw their houses burnt, relatives shot and women raped by foreign terrorists who held sway in those days.

The second portion of the article quotes several security forces personnel from the Army, CRPF and the state police. Only one of these, Bhavnesh Kumar Chaudhary, has been quoted by name, while the remaining are all credited to the institution without name.

It seems the authors wish to create an impression that the security forces are worried by the alleged belligerence being shown by the people during the counter-terrorist operations. Clearly, the objective seems to be establishment of a trend that motivates others to follow the path of dissension and disruption.

The authors, without realising, have given credence to some positive aspects. The piece has corroborated, inadvertently of course, the policy of “minimum collateral damage even at the cost of own casualties” being followed by the security forces.

Common people would pelt stones at security forces personnel involved in a gun fight with terrorists only when they are confident that the former would “exercise restraint” even under circumstances of such grave provocation.

The piece also corroborates that terrorists in Kashmir nowadays follow the policy of using locals as human shields and in this they are being assisted by civilian over ground workers even when encounters and gun fights are underway. This is a very serious development towards which the security and intelligence agencies need to pay a lot of attention.

The “Shafqat’s of Kashmir” are experts in their field; while calibrating the chaos they know that they would never be victims of “collateral damage” since they understand the patience threshold of the security forces.

Sadly, the tone and tenor of the article leads one to believe that the motive of writing was not to highlight a threat which the common people are facing due to pressure by terrorists over ground workers but to gleefully advertise a secessionist and divisive trend. The intention seems to create an impression that thousands in the Kashmir Valley are fearlessly targeting security forces in support of their terrorist “brothers.”

Shamir Showkin Lone and Muhammad Younis, the authors of this piece are enjoying established careers in journalism. They have worked not only in Jammu and Kashmir, but also in Delhi-based media houses and multi-national corporations. The main author, Shamir Lone, has been a staff writer at ScoopWhoop at Delhi and has done a defence journalists course with the Indian Navy.

It is quite depressing to note that while enjoying the fruits of being a part of the Indian Union they are instigating those younger to them to take a self-destructive confrontationist path.

It is quite clear that the article is high on rhetoric and low on demonstrated facts. It, however, covers some serious issues which the authorities need to investigate closely. Shafqat Ahmed, Nazar ul Islam and others quoted in the article should be questioned and the veracity of the contentions made should be checked and action taken as required.