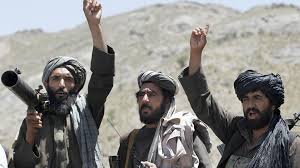 The US has, off and on, made some tall claims of having reigned in the Taliban in Pakistan. These claims stand exposed as fatuous against the backdrop of the military success attained by the organisation that is putting a severe strain on the weak government operating there.

A few days back, 0n May, 16, a major attack by Taliban on the Afghan provincial capital of Farah was repelled by the Afghan forces only with US assistance. The rebels still managed to puncture the security perimeter which indicates their strength and determination. Had they succeeded the Afghan government would have suffered a severe setback.

A very recent release has quoted a provincial police chief of Afghanistan as saying that Taliban fighters have attacked several security posts in three provinces killing 16 security personnel. The press brief also adds that 25 Taliban rebels have also been killed in the attacks.

The aforementioned are adequate pointers towards the resurgence of the Taliban as against the weakening of the incumbent government.

It cannot be denied that there was a time in 2011 when the diminishing influence of Al Queda, triggered by the  killing of Osama bin Laden and neutralising of its top hierarchy such as Sheikh Said Al Masri, Atiyah Abd-al-Rahman, led to a downturn in militant influence in Afghanistan.

However, it did not take the Taliban too long to bounce back and by 2012 it was in form again with enhanced capabilities. Ever since, Taliban’s strength, motivation, funding and tactical proficiency have improved manifold and its commanders are attempting to make strategic gains, to the extent of attempting to broker an agreement to get Afghanistan or at least a part of it.

To convince US and other stakeholders, they have made it amply clear that the Taliban La’iha or code of conduct, is strictly enforced and the leadership is in absolute control of the cadres.

US attempts to use Pakistan as a platform to get Taliban on to the negotiating table have come to naught because the Taliban does not trust the country, its army and its intelligence agency, the Inter Services Intelligence (ISI) at all. In fact, Taliban quotes Pakistan as one big reason for its decision to remain armed even if a settlement with the US and Afghanistan Government is brokered. Pakistan, on its part, is hesitant to take action against the Afghan Taliban on its soil because of concerns that the group will redirect its violence against the country and Afghan intelligence will support it.

As per the study report on Taliban, the operational expenditure of Taliban is estimated at 150 million USD. This does not include expenditure on equipment and creation of organisational base. A district commander gets anything between 50,000 to 200,000 USD depending upon the level of activity in his area. Taliban continues to openly raise majority of their revenue through donations, regularly throughout the year, from all cities of Pakistan. They are also a funded participant in the narcotics trade with Pakistan.

US interest in Afghanistan has been fading over the years. The Trump administration has sidelined its engagement with this erstwhile focal point significantly. It seems that President Trump has directed a check on Afghanistan only to the extent of “making sure that AL Qaeda cannot attack US homeland and US interests and our allies” or project violence against American citizens.
The growing influence of the Taliban in Afghanistan and its blow hot, blow cold relationship with Pakistan is a good reason for India to be very worried.

Earlier in this month, on May, 7, seven Indians working with the Indian power company KEC International were abducted in Northern Baglan Province of Afghanistan. Even though it is being said that the KEC employees were mistaken for being government staff, India cannot afford to take the perceptive Taliban belligerence lightly.

An increase in Taliban influence invariably has a negative impact in the security situation in the Kashmir valley. It should never be forgotten that the initial impetus to militancy and terrorism in Jammu and Kashmir came when the Taliban was ruling Kashmir. The Tehrik-e-Taliban Pakistan (TTP) has a well documented agenda of bringing Kashmir under the ambit of Sharia through an armed struggle. TTP is ideologically aligned with the Afghanistan Taliban and as a bottom line they are chips of the same block.

It is also notable that the new flock of terrorists operating in the Kashmir Valley, regardless of their being local or foreign, have dismissed calls for Azaadi (freedom) or merger with Pakistan and instead embraced the Sharia ideology which is common to both the ISIS and the Taliban. With the ISIS being a bit on the back foot, it is now the Taliban that could well emerge as the ideological mentor of the terrorist movement in Kashmir

The regressive policy of the Taliban based on the belief that democracy, education, religious tolerance and women’s rights will lead to degradation of the society will lead Kashmir back to the medieval ages.

The Af-Pak region once again stands at a cross road mired with ambiguous policies of the stake holders and a fight to the finish getting into motion. The upsurge of the Taliban needs to be closely watched. India needs to watch the situation very carefully and exert maximum pressure to ensure that the stability of the incumbent Government of Afghanistan is not compromised. At the same time there is a need to keep a close watch on the Kashmir situation so that evil designs being formulated from across the border are not allowed to fructify.

(Farooq Wani is a senior journalist and TV commentator)