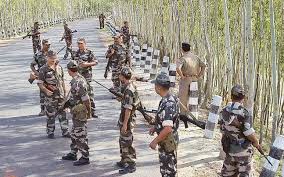 The terrible loss suffered by the Central Reserve Police Force (CRPF) in Sukma is painful. Already volumes have been written and spoken of on the subject and academically there is nothing left to add on.

Home Minister Rajnath Singh has stated that the government will “review its strategy to battle Naxalites,” in consultation with chief ministers of affected states.

The NDA government had announced a new strategy to tackle Left Wing Extremism (LWE) in October, 2014. Has the Home Minister, with his statement, implied failure of the strategy adopted by NDA government in 2014? If this is the case then the weakness of the failed strategy should become the first discussion point, maybe it was missing the woods from the trees.

Along with the statement came the usual run of the mill comments of the attack being a cold bloodied murder and an act of cowardice and desperation.

One does not find anything cowardly in an ambush laid out in the middle of the day and it is definitely not a sign of desperation. It simply proves that the Naxals are not afraid to “give battle” and that too with a high degree of morale and commitment.

It is our soldiers who, due to the apathy of their seniors and political leaders, are possibly becoming desperate. The Home Minister, therefore, should get his assessments correct.

There is every reason to give an ode to the security forces (the CRPF in particular) for their inherent courage and sterling service towards upholding the sovereignty and integrity of the nation in the face of great odds and amidst negligible support from the government.

The CRPF has, in the discharge of its duties, exhibited the highest threshold of courage and dedication towards the Nation. The organisation has absorbed a huge loss of precious lives and yet remained steadfast in the performance of its duty under very challenging and difficult circumstances.

The force has exhibited a high degree of versatility and discipline while extending itself to unprecedented limits of endurance. The nation has a debt of gratitude to pay to the brave soldiers of the force and especially those who have fallen while fighting.

The Nation also needs to give more than lip service to the requirements of its soldiers. The need is for the Home Minister and his team of bureaucrats to address the immediate requirements of the CRPF rather than sit in a huddle with chief ministers. The Home Ministry should first do what is in its capacity to do towards energising the paramilitary forces under its command. For this no recommendation is required from the State Governments.

There are many aspects that have been pending since long despite being easy to implement and absolutely necessary for increasing the efficiency levels of the CRPF.

It is common knowledge that CRPF was conceived as a central police service to augment the state police on an as required basis for elections, riot control and such like activities. It was not repeat NOT meant to be deployed in Counter Insurgency (CI) and Counter Terrorism (CT) scenarios which were in the domain of the army and, to an extent, the Border Security Force.

Now, CRPF has been put in the forefront of CI/CT Operations in both Jammu and Kashmir and the Naxal infested areas even as the government remains indifferent to the need of restructuring the force to adequately face this change of role. The soldiers have proved their mettle time and again and that too with their blood, but the government has not done anything to empower, equip and energise them.

A basic point that is highlighted every time the force suffers heavy casualties is weakness in the command and control structure. Any force involved in CI/CT operations needs to be led by well trained officers. One does not question the capability of the IPS officers who direct the CRPF, but the fact remains that they have not been trained for military operations.  They simply do not lead from the front; one has not heard on many officers of the CRPF being injured or losing their lives in operations.

The impression being given is that politicians do not wish to disturb the apple cart of the civil services (read IPS) from where the officer cadre comes. It is ready to move in circles and allow soldiers to be butchered but it will not lift a finger against the civil servants.

Continuity in the operational role, pre-induction training and issue of specific equipment when the role is being changed do not seem to be matters that are given much attention in the CRPF. The organisation is expected to shift from election duty in Punjab, to riot control in Kashmir and onwards to road opening in Sukma in a jiffy. Their versatility is becoming their biggest curse.

Provision of decent living conditions, assured administrative support, cohesive sub-units, integration with the other elements like police or army who are also operationally involved are not being paid much attention to.

In the absence of a good information structure led by a proactive public relations department, the force is constantly being depicted as ineffective and inefficient. This has a negative effect of the morale of troops, hence, the need to pay more attention to information warfare.

To summarise, the Indian forces involved in CI/CT operations need to be well led, well trained and well equipped for effectively discharging their duty and the CRPF does not meet any of these parameters even at a fifty percent level.

The aforementioned is not something which cannot be implemented, there has to be conviction and the will to do so. If done, casualties in operations will not cease but they will definitely be minimised.

It is imperative to send a clear message that the Nation will not remain hostage to criminal elements who wish to pass off as revolutionaries, for which, the government has to come up with coherent directives and policies backed by financial outlays.