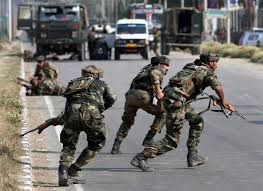 Terrorists in Kashmir took their bloody toll yet again with the brutal killing of two personnel of the Central Reserve Police Force (CRPF) on Monday, 11 May. Chef Minister Mufti Mohammad Sayeed must be ruing the day when he, rather prematurely, offered a hand of friendship to separatist, divisive and terrorist forces. His attempt towards generating goodwill has clearly been construed as an act of appeasement by these evil forces and can motivated them to increase the threshold of violence in the state.

The cycle of violence began with a deadly terror attack at Kathua, Jammu, on March, 20, days after the Mufti led coalition government took oath of office and Mufti made public his policy of appeasement. In this attack four people including three policemen of JK Police were killed.

The latest attack in the Kashmir valley is the third over the last few days. On Saturday, May, 09, many civilians were injured in a grenade attack at a market in Shopian, South Kashmir. A month earlier, on April, 06, a group of terrorists in army uniforms shot dead three policemen also in Shopian.

It is widely believed that Mufti has directed his police force to desist from arresting or detaining anybody under the Public Security Act (PSA). The directive followed by this ruthless targeting of police personnel would have negatively affected the morale of the police force. Mufti will now have to work overtime to contain the damage.

If this is the reaction of the terrorist and disruptive elements to the conciliatory policy of the state government and scaling down of the PSA, imagine what would happen if a decision to scale down the Armed Forces Special Powers Act (AFSPA) is taken.

It is not without reason that security experts and other sane voices are in agreement with the opinion expressed by the Indian Army that the time is yet not right in Jammu and Kashmir for any change in the security paradigm and that tinkering with the AFSPA will have grave security implications.

Coming back to the issue of the terrorist initiated violence, those who have a proclivity to hype situations have been building a doomsday picture of the security scenario in the Kashmir valley. Predictions of a possible revival of the terrifying days of the 1990’s abound. Those were the days when terrorism was at its peak and terrorist called the shots in many areas of the state, especially the Kashmir valley.

It can be said with complete confidence that the security forces led by the Indian army and supported by the local populace will never ever allow the situation to degenerate to the 1990 level.  Te separatist and divisive forces simply do not have the capacity to engineer a revisit of that situation

It is a fact, however, that the Pakistan army which dictates Pakistan’s Kashmir policy has no intention of registering a letdown in its proxy war against India. The officers of the army are fully aware that what they are doing goes against established norms of soldiering. A proxy war fought through unconventional means is unethical, immoral and dishonourable. No soldier in the world who is worth his salt will ever indulge in such activity.

In order to save face the Pakistan army has left direction of the process in the hands of the unscrupulous and secretive Inter Services Intelligence (ISI) that in turn is using fundamentalist Jihadists to do the dirty work on ground.

Even under the trying circumstances where the Pakistan army is fending off a virtual civil war along its western border it has not let the focus move away from Kashmir. The level of involvement has gone down due to constraint of resources bit a minimum threshold is being maintained. This will definitely be upgraded and escalated the moment the army gets a respite from its existing problems; the escalation will be done at both the operational and political level.

India should, therefore, remain ready for a drastic increase in terrorist activity coupled with a financially and politically resurrected Hurriyat. This will come by much sooner than expected and the gruesome murder of the CRPF soldiers is a grim reminder of the same.

Presently, terrorists are active more in urban areas mostly in the Pulwama-Shopian-Kulgam belt on the periphery of the summer capital city of Srinagar. Terrorists are also pointedly attacking security forces, mainly police and paramilitary. There are many reasons for the same. First, terrorists do not wish to further alienate the local populace for which reason the outsider security force personnel are a more lucrative target. Second, an attack on security forces in an urban environment elicits more media coverage than killing of a poor villager in a remote area. Lastly, such acts and the inability to react lower’s the morale of the security forces thus giving a psychological advantage to the terrorist.

The newly installed government of Jammu and Kashmir should remain well aware and upfront about the terrorist intention while looking at the larger picture. The medium term perspective clearly points toward an increase in destabilizing activities.

The media should ensure that it plays a nationalist role in this fight against terrorism. The low coverage given to the martyrdom of two brave soldiers of the CRPF indicates that a lot of ground needs to be covered in this regard. In a well regarded newspaper like Hindustan Times the act was covered as a small business like piece on Page 16 as part of the short stories segment. Electronic media did not cover the incident inadequately, if at all. Surely it deserved much more than this considering that Geelani and Mirwaiz gets preferential treatment with photographs.

There is reason to be happy about toe improved situation in Jammu and Kashmir but the job is not over and done with as yet. The sooner this realization dawns to all concerned the better would it be for national security.