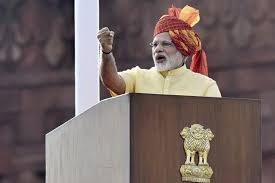 Prime Minister Narendra Modi’s statements on the security situation in Jammu and Kashmir, in the course of his address to the nation on the 70th Independence anniversary of the nation, have indicated the government’s approach to the sensitive issue.

The prime minister was emphatic in denouncing the cult of terrorism and said that no leniency will be shown in this regard. He called upon the youth to come to the mainstream and speak about their issues.

While refereeing to the divisive and disruptive politics of the separatists he said that resolution will come, “not through bullets or abuses but through embracing of every citizen of the state by the nation.”

On foreign sponsored terrorism, he said that the whole world is with India for a joint fight against the global menace.

The prime minister assured the soldiers that the nation was with them in their fight against all challenges being faced by the country, especially terrorism.

He said that the Armed Forces of the nation were well prepared to take on multi-spectrum security threats including cyber, space, seas and most of all, proxy wars.

He also emphasised the commitment of his government to meet the aspirations and dreams of the people of the state by accelerating the development process.

The message that the prime minister has given out is loud and clear. He has told inimical foreign powers (mainly Pakistan and China) that India is ready to face every possible challenge that is thrown towards her and is not going to be pressurised by the any kind of sabre-rattling.

He was unambiguous in his assertion that all actions of the security forces in maintaining the security and sanctity of the nation will get full support from the government. This coupled with his statement that no leniency will be shown to terrorists’ gives to the security forces in Jammu and Kashmir a free hand to conduct relentless operations and rid the region from the scourge of terrorism.

While asserting that the government will not be cowed down by the belligerent utterances of the separatists he has expressed readiness for a rational debate.

The outreach of the prime minister to the Kashmiri people has elicited a positive response from large sections of society. Even the Hurriyat leaders have good words to say about his remark of bullets and abuses not being a solution to the problem.

There is, however, some apprehension regarding implementation of this idea in view of the tense situation in the Kashmir valley with shutdowns and curfews being a normal happening.

It is here that a bold initiative by the people of Kashmir can have a game changer effect. The people of the valley need to leverage the outreach of the prime minister by taking affirmative steps in assisting the government and the security forces towards ushering peace and stability in their land.

The people should take a lead in appreciating the tremendous role that Indian soldiers coming from all corners of the country are playing to ensure the security of Jammu and Kashmir. All attempts by disruptive forces to denigrate the sacrifice of the soldiers should elicit vigorous condemnation.

Public frenzy that is being engineered to dilute the counter-terrorist operations and allow the terrorists to flee should be strongly contested. Those indulging in such activities should be named and shamed. The spread of misinformation and false propaganda that is vigorously aided and abetted by Pakistan should be exposed. The Kashmiri press that is so openly supporting the divisive, disruptive elements to further the objectives of inimical foreign forces and indulging in airing of fake, anti-national news should be subjected to massive public outrage.

The self serving perfidy of the likes of Burhan Wani who have picked up the gun against their own people at the behest of an evil enemy like Pakistan should be laid bare. The growing generations of Kashmiri youth should be told as to how such people have been and continue to be responsible for the death of many innocents and how they have caused great pain and suffering to their Kashmiri brethren. The necessity of exterminating such rogues in the Kashmir society to usher peace in the beautiful land should be spoken of.

Security forces do not have any political agenda; they would love to come to Kashmir on a peace posting rather than risk their lives every minute that they are there. They cannot do so because the enemy is not relenting from casting an evil eye of the region and the people. This point has to be emphatically driven home.

The prime minister has reached out to the people of Kashmir. It is now up to them to stand up and be counted. They have to make sure that those laying down their lives for the safety and security of their fellow citizens in Kashmir are not sidelined in favour of petty terrorists. They should not allow the likes of Burhan Wani to dominate the destiny of the region. All attempts by Pakistan to control the political narrative of the state should be exposed and challenged.

The people of Kashmir should take the words of Prime Minister Narendra Modi as an assurance that their one step forward will be supported by ten from their fellow citizens of the country. The staged has been set for the final push to usher long lasting peace, prosperity and development in the state of Jammu and Kashmir, now the act is awaited.

(Jaibans Singh is a reputed commentator on Jammu and Kashmir)