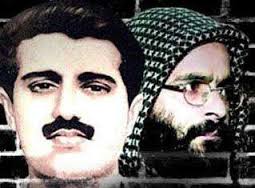 The month of February witnesses a disgusting exploitation of the deaths of Maqbool Bhat and Afzal Guru by the Kashmiri separatists to further their evil agendas. It was in this month that Maqbool Bhat was hanged for complicity in the murder of a police inspector and Afzal Guru was hanged for his complicity in the conduct of a terrorist attack on the Indian Parliament in December 2001. For many years now, separatists have been following a pre-set narrative to raise passions by giving wind to these incidents.

This year is no different! Hurriyat called for a complete shut down on February 9, the anniversary of Guru, and February 11, the anniversary of Bhat, and marching from Lal Chowk to the United Nations (UNMOGIP) office at Sonwar on February 10.  Stringent calls to maintain unity for the separatist cause are being made as before. The call has elicited lukewarm response from the people! They will comply more to avoid a loss to their shops and property than any ideological affinity with the projected cause.

The people of Kashmir no longer hold the conviction that the separatists are genuine in their regard for both Afsal Guru and Maqbool Bhat since they are brought out of the closet with an eerie regularity every year in the month of February and forgotten as soon as the Bandh and the march to the UNMOGIP are over and done with.

Mostly this time also witnesses a spike in terrorist activity also but this year it has not happened due to the vigilance by the Indian Army and other security forces and heavy snowfall since the beginning of February.

The whole thing boils down to yet another cut-paste exercise to establish their relevance to their financers and masters sitting in foreign shores.

While the separatists go about implementing their pathetic calendar it would be pertinent to recall some home truths.

The truth is that these screaming so-called guardians of the collective conscience of the valley were nowhere to be seen when Afsal Guru needed them most? The very leaders who are bending backwards to show allegiance with him did not raise a finger in his support while he was alive. They did not deem it necessary to provide Guru with the legal aid that he required while his case was being tried in court.

There are other pointers to the ambivalent policy that the separatist lobby had adopted towards Afsal Guru while he was alive. An expose by the whistle blower, Wiki-leaks, refers to one cable 82638 dispatched from the US mission in Delhi on October, 20, 2006; the cable refers to a conversation of a US representative with Hurriyat leader, Mirwaiz Umar Farooq, in which the latter admitted that his faction had chosen to remain quiet about the issue because they did not feel strongly that India should pardon Afsal. “If someone is a terrorist he should meet a violent end,” Mirwaiz is reported to have said candidly.

He added that moderate members of the Hurriyat were unable to express this view publicly, given the mood in the valley and the threat from terrorists. He further elaborated for good measure that some speak on Afzal’s behalf individually only out of a sense of obligation rather than strong conviction.

Maqbool Bhat, a resident of Trehgam, Kupwara, entered the political arena of Kashmir with an ideology of Jammu and Kashmir existing as an independent state. Being young and impressionable, he came under the devious spell of Pakistan. He and his friends generated anti-India propaganda and committed a number of crimes, including hijacking and murder.

Since Maqbool Bhat spoke more and more about an independent Kashmir, free from both India and Pakistan, he became persona non grata for the Pakistani military establishment. He was forced to flee from Pakistan Occupied Kashmir (POK) back to Jammu and Kashmir where he was arrested for his crimes, tried as per law and sentenced to death.

His biggest mistake was to opt for the path of violence. He also erred by not understanding the benefits that his people would accrue by aligning themselves with democratic tenets of the Indian nation. The biggest mistake, however, was his reliance on Pakistan for support.

Towards the end of his life he realised his mistakes. Sadly, by that time, it was too late for him to make amends. He became instrumental in guiding his own family members and a host of young, impressionable and misinformed young boys towards a path which gave them nothing but hardship, disruption and finally death.

The folly of misguided ideologies of both Maqbool Bhat and Afsal Guru are very visible in contemporary Kashmir rooting for democracy and freedom as part of India – the largest democracy of the world. Today, separatist organisations like the Hurriyat are  facing a potent threat of being politically marginalised and are invoking the names of Bhat and Guru only to save themselves. They have made no attempt to ameliorate the emotional suffering of the families of the two for whom they profess undying respect and loyalty.

It is very sad to see young boys who do not know the facts of the case come out and create social disruption at the behest of the separatists. They are playing in the hands of self serving politicians to follow a path that has no relevance whatsoever.

It is time to expose those who are making made millions by politically exploiting the death of Maqbool Bhat and Afsal Guru. It is time to derail their evil agenda and save the younger generation from following a wrong and self-destructive path that they are being led to on the basis of misinformation.   It is vital for the people of Kashmir to ensure that their young boys do not become prey to Pakistan’s vicious propaganda being played out through their stooges in the Kashmir valley.

Under all circumstances the boys need to be stopped from taking the path chosen by Maqbool Bhat and Afzal Guru, which led to their death and plunged their families into the depths of misery for no reason whatsoever.

(Jaibans Singh is an author, columnist and commentator)