Intense political activity in China has now culminated with Xi Jinping securing for himself an unprecedented third  term as President. Now Xi stands self-anointed as the uncrowned Emperor of China for life. It has happened amid a lot of speculation of his failing health and rumours of a coup led by some People’s Liberation Army (PLA) Generals who, apparently, have been ruthlessly purged.

In getting to this unassailable position, Xi has successfully jettisoned the policy of “collective leadership” so assiduously nurtured by Deng Xiaoping, with the specific intention of ensuring that personality cults do not enter the Chinese political system. Now, as things stand, Xi is also going to be chairman of the all-powerful Central Military Commission, which implies that only he will prevail in the party as well as the army. He has shaken off all opposition and surrounded himself with loyalists to further strengthen his position.

Political pundits the world over are quite amazed by the fact that Xi has managed this “coup” despite China being mired in one crisis after under his decade long stewardship. The post-COVID economy in China is in shambles and people are chafing under the Zero Covid policy which is causing severe setback on the economic front.

In dealing with the many controversies during his previous two tenures at the helm, President Xi Jinping has always pursued an aggressive policy to silence his critics and dissenters. Now, having attained the unassailable position of an absolute, uncontested despot, he is likely to be even more aggressive than before. The reality is that both China and the world now have to no contend with a leader who looks upon himself as a God sent messiah for the world wide acceptance of socialism as a superior concept. He said as much and more in his 104 minute speech in the 20th Congress of the Chinese Communist Party (CCP).

His philosophy of insisting that “the East is rising while the West is declining” has stayed much the same over the years that he has remained in power, what has changed now is his position. In view of the absolute power that he will now wield, he is less likely to shy away from conflict, especially so with those whom he looks upon as his global rivals. The United States and India will remain on top of his antagonistic agenda with focus on the Taiwan strait and on the unresolved border issue with India.

While referring to Taiwan in his speech, Xi Jinping reiterated that China wanted to gain Taiwan peacefully but “will never promise to renounce the use of force.” This is a direct indication of force being the mainstay of the Chinese policy towards Taiwan in times to come. More than India, it is the US that needs to be worried since the possibility of a direct confrontation has become all the more potent.

Xi is likely to launch his assault against the US and India with a huge information campaign directed at his domestic constituency as well as the International community. Chinese “media influencers” who are acknowledged by Xi as the Key Line of Effort (LoE) will be put to good use. Soon the world will see some hard hitting content in the Chinese official mouthpiece, the Global Times, which will be faithfully reproduced by the army of  “special writers” who are on the payroll of the Chinese government. Such writers are spread out globally with the largest presence in India. The effort will be further augmented by the huge social media machinery of the CCP. While influencing the world, China will ensure that its domestic audiences are kept away from “sensitive information” through firewalls and a deep application of the “Iron Curtain.”

Diplomatic efforts of the new aggressive China will be directed towards strengthening ties with like-minded regimes like Russia and North Korea among many others. The falling sphere of influence of the US due to faulty policies of the incumbent Biden Government will offer a lot of support to China in coming days. 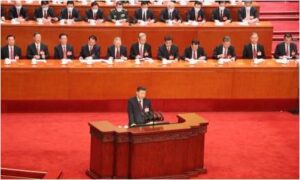 So far as India is concerned, the 3488 kms long frontier where proper demarcation does not exist will form a formidable challenge in times to come. While the Indian army will ensure that the sanctity of Indian perception of the Line of Actual Control (LAC) remains sacrosanct, many sponsored voices will give information to the contrary. Hence, Indian military action preparedness will need to be supported with an information policy that can meet Chinese duplicity. As things stand, India is quite unready in this critical domain.

The Indian Information machinery will need to give due emphasis to the reality that China has never shared any border with India. What we see today is an offshoot of the occupation policy of the CCP with has led to the creation of China Occupied East Turkmenistan (COET) and China Occupied Tibet (COT), the truth about the McMahon Line and the  Johnson-Ardagh Line needs to be widely circulated domestically as well as globally.

China has been rapidly building upon its infrastructure along the LAC. A rail link between Lhasa and Nyingchi in China Occupied Tibet (COT) is now operational. A strategic highway joining Chengdu to Lhasa via the Medong area close to the LAC has been completed.  India too has built upon her infrastructure at a frenetic pace. The Dhola-Sadiyia Class 70  bridge on the Lohit River in Assam is now operational as is the Bogibeel rail road bridge over the River Brahmaputra between Dhemaji and Dibrugarh, the Daulat Beg Oldie to Shyok-Darbuk road  and the Atal tunnel. In the last two years, more than 100 roads and 50 bridges in border areas have been upgraded by the Border Road Organisation (BRO). Military strength has also been increased to the required extent along the LAC. The message from India to China is loud and clear. If dialogue does not persuade Beijing to withdraw its troops from Indian territory in Ladakh, a military option will remain on the table since the territorial integrity of the country is not negotiable. The message needs to be conveyed to the Indian people and the world at large with utmost clarity.

In the Indo-Pacific region, India stands firmly against Chinese expansionist designs. India’s response will n be in concert with Japan, Australia and the United States who are members of the Quadrilateral Security Dialogue (QUAD). However, it has to be understood that while QUAD provides to India an opportunity to emerge as a significant force in the multilateral order of the world, it does not really address the existing security concerns along the LAC. The strategic space that exists due to this dichotomy needs to be filled with astute diplomacy.

For China, the flip side is that notwithstanding its bravado and gruff assertion of military and economic superiority, the country is contending with growing unemployment, loss of business, relocation of global companies,  loss of control over Hong Kong realignment of global supply chains, food shortage, growing income disparities, COVID, cruelties of PLA, suppression of dissent with iron hand, an unprecedented drought, the spectre of climate change and the fastest demographic decline in human history. So far as international relations are concerned the failing Belt-Road initiative and the unfavourable international environment are considerable challenges for the country. All of these aspect cast a pall over China’s future. In order to quell internal dissent, Xi has, with assistance from his huge propaganda machinery, constructed a narrative of himself as a crusader against Western hegemony. It is necessary to make China as well as the world realise this vulnerability. Deteriorating relations with the USA, EU nations, Japan, South Korea and Australia will compound China’s woes and will be in India’s favour.

As the saying goes, “If China talks of peace, one must prepare for war.” The bottom line is that India has to remain prepared for a long haul. Discussions have not been very successful in preventing Chinese misadventures and incursions along the LAC. China is considerably chastened but getting ready for a more intense engagement. The world must be made to realise that India has taken a stand that is righteous, justifiable and matched it with more than adequate military strength on ground.  Only an empowered and capable India with a pragmatic approach can meet this challenge.