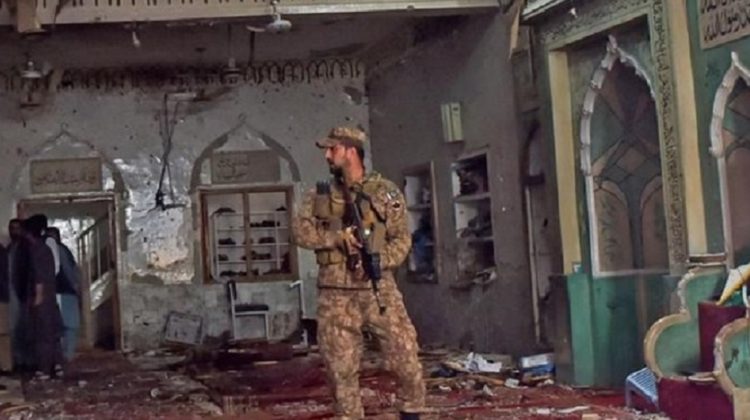 On Friday, 04, March,  a lone suicide bomber shot the police guards at the entrance of a packed Shia Mosque at Peshawar’s historic Qissa Khwani Bazar with a pistol. He then entered the Mosque and blew himself up in the middle of worshippers offering Friday prayers. At least 60 people were killed and close to 200 are reported injured in the suicide bombing. The Islamic State (IS) has claimed responsibility for the terrorist attack, which implies the hand of Tehreek-e-Taliban (TTP) also since the two organisation work in close coordination.

It seems that, in recent days, violence has shifted its centre of gravity from Balochistan to Khyber-Pakhtunkhwa. In Balochistan, on 2 February  2022, 16 Fidayeen (suicide squad) of the Majeed Brigade of the Baloch Nationalist Army (BNA) executed simultaneous attacks on two military bases of the Frontier Corps of the Pakistan Army in Nushki and Panjgur. In these well planned and professionally executed attacks the overall casualties sustained by Pakistan are estimated to be about 200 soldiers killed.

There is, however, a lot of difference in the two acts of violence referred to above. While the one in Balochistan was the outcome of the freedom struggle of the Baloch people, the one in Peshawar has been carried out by Sunni extremists to terrorise the minorities of Pakistan and to show their power to the government of the country. In Pakistan, the Hindu, Sikh, Christian, Buddhist and Jain communities have already been decimated through wanton killing, conversion and forcible exodus to India. Now the majority Sunnis are targeting non-Sunni Muslims (Shias and Ahmediyas) to fructify the objective of creating a pure Sunni state.

There have earlier been many such horrific instances of terrorist strikes in Peshawar. December, 16, 2014, witnessed a barbaric killing of school children over there in a terrorist strike. 132 innocent children among 148 people were killed without reason. The TTP took responsibility for the act. A year earlier, in 2013, the TTP attacked a Church congregation and killed dozens of people including children.

Now, after relative peace for many years, the recent attack has heralded the revival of terrorism which does not bode well for the restive province located on the border of unstable Afghanistan. Despite the criticality of the situation, the Government of Pakistan has remained focussed only on suppression of facts and indulgence in blame game.

The thrust is on telling the world that the cricket match against Australia being played at Rawalpindi, only 145 kms away from Peshawar, continued undeterred.  This “achievement” of continuing with the match is being highlighted with an oblique reference that some forces are attempting to derail the “landmark cricket series.” It is further being emphasised that these forces have “failed to achieve their nefarious designs.”

Further, Prime Minister Imran Khan stated that Islamabad is fully aware of the motives and perpetrators of the bombing, but did not name any group. Foreign Minister Shah Mehmood Qureshi was more forthcoming in putting a finger of suspicion on the political opponents of the ruling party with an oblique reference to India providing the wherewithal for the terror strikes.

The fact is that the blast has come at a time when there is a strong move in Pakistan to oust the Imran Khan led Government through a no-trust vote, for which, there is an anti-government long march heading for the federal capital under the leadership of Bilawal Bhutto. In the backdrop of the terrorist strike, Bhutto has blamed the government for not implementing the National Action Plan (NAP) to check terrorism in the country and accused it of surrendering before terrorists.

To make matters worse for the Government, the Financial Action Task Force (FATF) has, once again, kept Pakistan on the “Grey List.” The blast will add to the international ignominy that Pakistan is facing.

The attack in Peshawar, that has specifically targeted the Shia minority community already referred to as an “endangered species” in Pakistan is an ultimate act of depravity. It gives a clear indication of the chaos that is enveloping the country and the manner in which sectarian fault lines are re-emerging there. Terrorist organisations in Pakistan are ruling the roost and exhibiting a capacity of targeting high value institutions with impunity.  Definitely the incidence of terrorism had increased in the country as the ruling dispensation has shown a distinct lack of will and capacity to face the menace.

As the world looks on with revulsion at the manner in which violence is enveloping Pakistan there is no strong voice emanating within the country against forces of terror that are running amok there. Even in this hour of extreme crisis the Pakistan army and its stooge government are not ready to say a word against the likes of Hafiz Saeed and Maulana Masood Azar whose terrorist outfits are thriving in the country with a specific agenda to destablise Kashmir and India.

This is where the question of morality and righteousness comes up. When a nation looks at an act of criminality through different prisms it loses the moral ground to fight against the same. In Pakistan the names of terror organisations may be different but their work is the same; they are also affiliated to each other. Terrorist’s shift from one organisation to the other quite often. Under such circumstances, a resolve to eradicate the TTP while leaving other organisations like the Lashkar-e-Taiba untouched would be self-defeating.

The Peshawar terrorist strike and other incident of violence have many lessons for Pakistan. The country has to realise that the policy of nurturing terror as an instrument of state policy in the fight against India was flawed in its very inception and needs to be set aside in totality. Terrorists are terrorists; they are criminals who have to be hunted down indiscriminately. Till such time that a realisation on these lines does not dawn upon the military and political leadership in Pakistan no headway in the fight against terror can be made.

(Jasbir Sarai is a social worker and columnist)