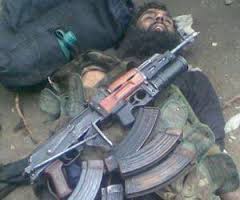 India has witnessed yet another vicious terror attack on its soil, planned and sponsored by evil forces based in Pakistan. There are many reasons pointing towards the choice of Dinanagar in District Gurdaspur, Punjab as a target for the attack.

Pakistani terror strategists wish a revisit of the terrible days of terrorism in Punjab. The idea of resurrecting the legacy of Jarnail Singh Bhindrawale is too lucrative for terror mongers in Pakistan to be discarded arbitrarily. Obviously, a terror strike is the best way to do so.

Pakistan is eager to exploit the feeling of disquiet in Punjab which is the result of bad administration, corruption and economic stagnation. The attack in Gurdaspur could well be an exploratory exercise, a spark designed to ignite a flame.

The terror leadership and the ISI in Pakistan would not be ignorant of the porous conditions of the International Border (IB) in the Punjab sector caused by the rampant drug smuggling. In any case, the vulnerability of the border fence increases with the onset of monsoons, especially in unplugged gaps along river beds.

A second reason for targeting Dinanagar would be the check on infiltration in the Jammu sector due to enhanced vigilance. The terror monger needed to act fast to scuttle the peace constituency that is being built between the Governments of the two nations and this particular plan would have come across as feasible and adequately sensational.

There is, however, every reason for the Nation to remain confident about the tenacity of the people of Punjab to thwart such evil enemy designs.

The Indian response was swift, strong and well coordinated. The government took no time in putting emergency plans into motion and the security forces moved in with speed and efficiency. The terrorists were blocked in by the quick movement of reinforcements and were killed after a gun battle that lasted only a few hours. By so doing, the damage that they were capable of inflicting was greatly reduced. Credit for this successful operation goes to the Punjab Police whose special forces conducted the same.

The incident has highlighted the urgent need to tackle the drug menace in Punjab on a war footing. A good way of doing so is to provide gainful employment to the youth of the state; they are well educated and hard working, but lack opportunity. It is necessary for the nation to channelise the energy of the versatile Punjabi community towards gainful pursuits.

The planners of the attack took great pains to hide the identity of the terrorists. However, markings on their shoes, the GPS system found in their possession and nomenclature of the weapons and equipment that they were carrying constitute irrefutable evidence of their Pakistani origins.

The manner in which the attack was carried out bears a distinct signature of training and preparation of the Fidayeen (suicide) squad by the Inter Services Intelligence (ISI) of the Pakistan Army and its favourite militant wing, the Lashkar-e-Toiba (LeT). The attack bears an eerie similarity to terror strikes carried out in the Kathua-Samba belt of Jammu and Kashmir by terrorists infiltrated from Pakistan.

Despite available evidence, the neighbouring country was quick to deny involvement, as was expected. The condemnation came fast, and so did the tongue in cheek words of commiseration. There is little probability of Pakistan acknowledging its hand in this incident any time in the future also.

Pakistan is going through a rough patch. Power continues to be concentrated in the hands of the Army, but the organisation itself stands weakened due to defeat at the hands of the Tehreek-e-Taliban Pakistan (TTP) on its western borders.

The Pakistan army continues to nurture a large number of militant groups which are constantly looking for their piece of cake. Power, therefore, is slowly flowing into the hands of fundamentalist extra-constitutional entities due to complicity of Pakistan army. The government is being relegated to the sidelines. Due to the ongoing turf war, the situation is spiraling out of control and the nation is on the brink of a civil war.

Under these circumstances, any idea of initiating talks with Pakistan would be self defeating. IT has been seen in the last few initiatives taken by the NDA Government that whenever the Prime Ministers of the two countries sit down to talk, the level of violence escalates. Jammu and Kashmir has witnessed a wave of ceasefire violations, infiltration bids and terror attacks in the hinterland in the wake of the Ufa meeting between Prime Minister Modi and Prime Minister Nawaz Sharif.

The terror attack in Punjab can also be considered a part of the policy of creating tension between India and Pakistan that certain powerful lobbies in Pakistan are pursuing with full vigour and commitment.

India has a diplomatic compulsion to remain engaged with Pakistan. Not much should be expected from this engagement. In fact, it should be subdued and out of the media glare. No effort, however, should be spared in exposing the terrorist activity on Indian soil emanating from Pakistan. The international community should be sensitised and compelled to stand up and take notice.

At the same time, internal security should be strengthened so that the terror attacks on Indian soil become counter-productive, militarily, psychologically, financially and politically. Communication links should be created with the recruitment base of terrorists in Pakistan to send a message that they are being conned into a fruitless and ignominious death by evil forces harbouring an agenda of hate and viciousness.

It is here that the media can play a positive role rather than playing into the hands of the terrorists by sensationalising their strikes and providing to them the publicity that they are looking for.

Countering terrorism is a serious business that needs the unstinted support of each and every citizen of the country. A united effort and resilience to meet the evil challenge posed by forces inimical to the progress and prosperity of the country would constitute the best method of ensuring its failure.