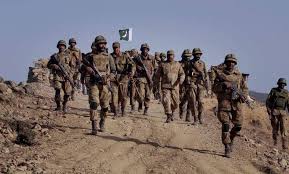 Operation Zarb-e-Azb, (Great Strike) the much awaited and much touted offensive by the Pakistan Army against the Tehreek-e-Taliban Pakistan (TTP) in North Waziristan was conceived after a total failure of the government initiative to engage the militants in talks and at a time when militant strength and morale was at its peak. The offensive was on a weak wicket right from its inception.

The timing of the offensive leads to a fair amount of misgiving; it was launched suddenly in the aftermath of the humiliating attack by militants on the Karachi airport. The operation, therefore, is being looked upon as a face saving reaction of the government and the army.

The Pakistan army may have had in place a plan for the offensive but the government was definitely not prepared for the aftermath, especially management of the Internally Displaced People (IDP) whose number is about to touch the million mark. This is not all; UNHRC has placed the figure of refugees who have crossed over to Afghanistan at an astounding 75,000. There seems to be a reversal of roles in the refugee scenario with Pakistanis now seeking shelter in Afghanistan rather than the other way round. The provinces of Pakistan neighbouring North Waziristan have raised their hands so far as management of this huge mass of humanity is concerned leading to a debilitating situation of human misery.

It is only recently that international aid has started pouring in with the US taking the lead with $ 31 million followed by Saudi Arabia giving $20 million. How much of this will reach the hapless people is another matter altogether. There are, however, disturbing reports that such internationally supported organisations that have the financial means and the wherewithal to make a difference in the relief programme are not being issued with the requisite No-objection certificates to carry out relief work. On the other hand, extremist organisations like the Jamaat-ud-Dawa are active, undoubtedly with the intention of recruitment for Kashmir militancy.

The manner in which the operation is being conducted at the tactical and strategic level is also quite shocking; it is not common military practice to bomb own territories inhabited by a civilian population of the country with fighter aircraft and attack helicopters. In fact, the ground offensive is also being launched with support of tanks and artillery fire. One wonders as to why so much hue and cry was made against US drone strikes when the Pakistan army has followed a similar destructive and inhumane route in its own operation. Such a military action cannot be defined as counter insurgency; it is an out-and-out civil war like situation. The huge numbers of IDP’s is a direct consequence of this avoidably intensive use of force.

While using forces from one side the Pakistan army has not closed escape routes on the other side thus negating the well established “Hammer and Anvil” tactics. This would have been possible only with concrete support of neighbouring Afghanistan. The ministerial level talks to block alleged TTP sanctuaries in Eastern Kunar and Nuristan regions of Afghanistan were held after the operation was launched. As expected, the talks have not resulted in provision of the desired assistance. As a result, the militants have run away and hidden themselves in the thick jungles of neighbouring provinces or onwards into Afghanistan.

The structures created by TTP in North Waziristan – the underground tunnels, the IED factories and other warlike stores have been captured and neutralised but the number of militants killed or captured remains very small.

As if these problems were not enough the government of Pakistan has piloted a so-called anti-terror law whose draconian nature has got human rights organisations and activists up in arms! The Protection of Pakistan Bill (PPB) gives sweeping powers for arrest and detention. There is a perception that the government has taken advantage of the ongoing operation to push this unholy piece of legislation that would later be misused for trampling civil liberties and hounding of political opponents.

In the absence of media freedom in the forward areas, information is restricted to the press releases issued by the Inter-services Public relations (ISPR) Department of the Pakistan army. These provide a wholly one sided view. There are no reports on the TTP and the civilians who continue to be trapped in the area. Only recently has the government been saying that all militants would be targeted, including the Haqqani network; whether this happens on ground or whether the Pakistan Army will deal preferentially with it’s allay is something that is bound to remain away for public scrutiny. It is widely believed that the leadership of the Haqqani network that has maximum presence in this region is already re-located in Rawalpindi and Islamabad.

Experts are of the view that even an unmitigated success of the operation is unlikely to eradicate the internal security problems of the country since the spread of militancy is across the nation; it will, at best, provide only a temporary respite. At the end it is not the use of force but a political initiative that will end the cycle of violence. Sadly, Pakistan does not have a single leader with a stature high enough to force all factions on to the negotiating table.

This is not the first time that the government of Pakistan and its famed army are committing a blunder of this nature. South Waziristan was also subject to a similar misconceived operation in 2009 code named Operation Rah-i-Nijaat. What was portrayed as a two month blitzkrieg by the army honchos continues to fester even now. Presence of the Taliban has not reduced but the people have lost whatever little they had.

Overall Operation Zarb-e-Azb comes across as an ill conceived and unprofessionally executed misadventure that is going horribly wrong. As things stand it is likely to fail in its objective of cleansing the state of militants but it will definitely leave in its wake a million shattered lives.