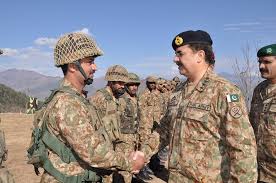 Pakistan Prime Minister, Nawaz Sharif, during his recent address to the United Nations General Assembly (UNGA), came up with a “four point peace initiative” for the resolution of the so-called “Kashmir problem.”  The mainstay of his proposal was demilitarisation. This, according to him, would entail withdrawal of the Pakistani Army from the occupied territories of the state and also redeployment of the Indian Army out of the state of Jammu and Kashmir.

A similar impractical and hare brained scheme was put forth by General Pervez Musharraf in 2006 (when he was military dictator of Pakistan) as a part of a “four stage interim solution.” He had also advocated “withdrawal” of Indian and Pakistani forces from both sides of Kashmir.

Khurshid Kasuri, who was the foreign minister during the dictatorship of Pervez Musharraf has come out with a book, ‘Neither A Hawk, Nor A Dove,’ in which he is said to have given an insight of Pakistan’s foreign policy during the Musharraf era.

It is well known that Kasuri was an energetic votary of the “four stage interim solution” set forth by his boss (Pervez Musharraf). In his book, he has advocated demilitarisation as a viable step towards lasting peace. “We looked at the interest of Kashmiris, Kashmiris wanted demilitarisation,” Kasuri said during an interview with Karan Thapar.

One would not condone the “inking of Sudheendra Kulkarni” in Mumbai, but, facilitating a book launch for Khurshid Kasuri in India does not come across as a good idea at all. Kasuri was never known to be pro-India when he was in power. It cannot be expected that in his book he would contain the Indian point of view; so why this overreaching hospitality?

Kasuri could have gone to sell his book in the US, Europe and countries forming the Muslim Ummah but he chose to come to India. He knew that some peacenik here with the support of the Indian electronic media would ensure publicity for his book. He has, by no means, been disappointed.

We now have two sworn enemies from the political landscape of Pakistan (Nawaz Sharif and Khurshid Kasuri) singing the same tune so far as Kashmir is concerned. It is quite obvious that, despite strong internal enmities, the political establishment in Pakistan comes on the same page insofar as Kashmir is concerned.  A typical example of an enemy’s enemy being a friend!

Under the circumstances would it be too far-fetched to surmise that the twin events (Speech by Nawaz Sharif and the book launch by Kasuri) have been carefully orchestrated to, once again, raise the bogey of demilitarisation internationally?

Pakistan had earlier made a concerted attempt to establish, through suggestive media leaks, that India’s erstwhile Prime Minister, Dr. Manmohan Singh, had in 2010-11 been amenable to the four point solution set forth by Pervez Musharraf. An impression was sought to be created that resolution to the Kashmir issue on these lines was almost done at that point in time. Dr. Manmohan Singh may have been ready to go ahead with making borders irrelevant, but he never endorsed any withdrawal of troops. The innuendo was planted by Pakistan by a diplomatic sleight of hand and some clever media manipulation.

By constantly using the word demilitarisation Pakistan is trying to create, in the international community, a fallacious impression that Jammu and Kashmir is militarised. India has deployed its forces in the state, especially in the Kashmir valley and Siachen, in accordance with it defense plans, threat perception and security requirement to safeguard its sensitive frontier state.  This is the unalienable right of every country and cannot be termed as militarisation.

It is quite apparent that Pakistan is determined to sell demilitarisation to the international community as a viable alternative. This is because Pakistan has much to gain should India, under pressure, succumb to this idea.

Should such a plan be implemented, Pakistan would simply send in its well trained, motivated and large force of terrorist Jihadis into Jammu and Kashmir and thus create a situation wherein India would lose control of the state.

Pakistan is using its military force to subjugate the people of Pakistan Occupied Jammu and Kashmir (POJK). In blatant disregard of international norms and ethics, it has illegally ceded large portions POJK to China. China has a huge military presence in these ceded areas and also in other parts of the occupied territories, especially Gilgit-Baltistan.

It is such perfidious actions by Pakistan that need to be reflected upon by the international community. It is here that demilitarisation is required.

If Pakistan is really keen to normalise relations with India it should, first and foremost, cease the practice of infiltrating terrorists into Jammu and Kashmir. It should also put an end to the incessant cease fire violations that it indulges in across the Line of Control (LOC) and the International Border (IB), which cause great damage to lives and properties of civilians who reside there.

In case Pakistan does so with a clean heart, the peace that it so ardently expresses a desire for will prevail.

The only honourable solution to the Kashmir issue is to return to India all territories illegally occupied by Pakistan so that all people of the state can enjoy the fruits of freedom and democracy as enshrined in the Indian Constitution, and in accordance with their legitimate rights as citizens of the country. The present situation where a large populace is being deprived of political, social and economic rights, while being under forcible subjugation of Pakistan, is highly untenable.

Against the backdrop of continued belligerence being shown by the Pakistan Army, that calls the shots in the country, India simply cannot reduce the threshold of security and vigilance anywhere along the country’s borders and the hinterland, let alone in Jammu and Kashmir.

India should expose the evil design behind Pakistan’s insistence on demilitarisation and put the unrealistic and unworkable proposal to rest once and for all.