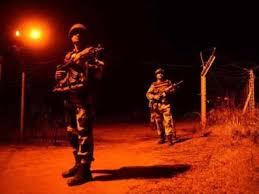 The aggression by Pakistan at Chakkan-Da-Bagh, Poonch, across the line of control that resulted in the death of five brave soldiers of the Indian army and grave injuries to one more is unfortunate. For how long does Pakistan think that the people of India will tolerate the imbecility of a nation that can be smothered anytime? An intrusion of the type that Pakistan has indulged in at Poonch and similar such misadventures that it has been indulging in at regular intervals can easily be construed as “Acts of War” and dealt with accordingly. India is well within her rights to react militarily to hostile acts. There is no doubt that the global community will hesitate from interfering in consideration of India’s righteous approach and stature as a global power. If such behaviour by Pakistan persists, there is every possibility of an upsurge of public opinion in India that would leave the government of the day with no option but to go for an all out war.

It is quite evident that Pakistani leadership has forgotten the lessons of the Kargil misadventure, if it learnt any in the first case. A reminder would not be out of place. Pakistan was very sure that its nuclear status would elicit international intervention in the Kargil war which would bring about a ceasefire in a few days. The world, instead, chose to sit back and watch the proceedings right up to the time when the entire strength of intruders was decimated by the Indian forces. After that, the US called Pakistan’s bluff and sent Nawaz Sharif packing with his tail between his legs and begging for a ceasefire. Pakistani withdrawal from the Kargil heights was a charade because there was nothing left over there to withdraw. Indian emerged stronger and Pakistan regressed into a military dictatorship. There is no reason why a similar fate cannot befall the country if it does not mend its confrontational attitude.

Coming back to the recent incident, it is distressing to note that the Indian reaction is following a template established over similar incidents in the past. On the day that the incident took place Pakistan immediately got into denial mode. It will remain so till the cows come home. By the evening, Indian television news channels had invited a set commentator’s from Pakistan for panel discussions. The system is so well established that even the Pakistani panellists do not change. Those invited are loud mouthed and abrasive; they have, by now, gained expertise in the game; they pep up the shows, improve the TRP’s, hog the limelight and create an impression that Pakistan is the epitome of pacifist virtue while India overreacts to small issues. By so doing, Pakistan is actually addressing its mentor, the United States and creating an impression that it is ready for talks but India is unreasonable and recalcitrant.

The response of the Indian government and the political leadership was also not very encouraging. In this instance as in the earlier ones, the government, after much vacillation made a statement in Parliament read out by Defence Minister AK Antony. The demeanour of the Defence Minister, who has taken on the mantle of being the sole spokesperson of the Ministry of Defence, generates nothing more than a feeling of helplessness. Fortunately, the Prime Minister maintained his signature silence otherwise his listless comments would push the nation further into depths of despair. The army which is looked upon to come forward and reassure the nation has, of late, chosen to maintain complete silence. Predictably, there was a furore in parliament with the opposition openly attacking the government. The entire proceedings would have delighted Pakistan no end.

The question is – should India go through this mindless exercise time and again or is some out of the box thinking in order? Over the years Pakistan has been gloating over its capability to manipulate international opinion with half truths and even blatant lies. Its leadership is, by now, convinced that this attitude will reap excellent results any and every time. The reality is that the US has, since long, seen through Pakistan but is waiting to secure its own backside in Afghanistan before tightening the screws; something that will happen soon enough. Other countries also have no doubts about the terrorist activities that incubate in this land of the pure and are waiting for the right moment to strike. It is highly possible that as the US tightens the screws others will simply pull the carpet. It is time for Pakistan to carry out a pragmatic reality check.

India needs to firmly send out a message that it looks upon such military transgressions by Pakistan as “Acts of War” and reserves the right to retaliate with full military might. The message should be understated but ominous and passed through every communication channel – the government, the media, diplomatic channels, Track II initiatives etc.

Beyond the strong message India Nation needs to put up a unified response that has a sobering effect on Pakistan. As a first step, the media should pass on the public sentiment to the government; most importantly, it should concentrate on the Indian perspective while ignoring Pakistan. The political leadership should resolve its difference behind closed doors and come up with a coherent policy for the government to follow. The army needs to gear up its operating procedures to ensure that such incidents do not happen at all and if they do Pakistan emerges as the loser; easier said than done but this is the need of the hour. India can no longer afford to be seen as soft and indecisive while dealing with an aggressive neighbour. This soft approach negatively impacts the country’s global image. Now is the time to deal with Pakistan with a well considered, strong, united effort; in case this requires military confrontation, so be it.