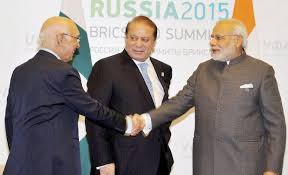 The breakdown of the much anticipated National Security Advisor (NSA) level talks between India and Pakistan on terror and regional security has come across as a big disappointment. The strategic community of both countries that well understands the need for stability in the subcontinent to open doors of prosperity for its teeming millions, rooted energetically for the talks.

Unfortunately, Prime Minister Nawaz Sharif, under pressure from the more powerful Pakistan Army and fundamentalist combine, cancelled the talks at the last moment.

Pakistan reneged on the Ufa agreement by insisting upon meeting the conglomerate of Kashmiri has-been’s that calls itself the Hurriyat. It also insisted upon bringing up the agenda of Kashmir in the talks. India, naturally, did not accept this breach of agreement and the rest is history.

Two pertinent questions arise from this fiasco created by Pakistan­ – is Pakistan prudent in placing its bets on the marginalised Hurriyat at the cost of improving relations with India? Is there any merit in the Pakistani belief that the people of Kashmir will leave India to join that beleaguered country?

Pakistan was quite disenchanted by the Hurriyat not so long ago. The meetings with the Hurriyat members during the times of President Musharraf and the Pakistan People’s Party (PPP) government were normally lecturing sessions with the Pakistanis haranguing the Hurriyat for not achieving any tangible results. The financial assistance being provided to the conglomerate by Pakistan was also cut down drastically.

Now, suddenly, Hurriyat has gained importance due to the media hype generated every time India disallows official interaction of the Pakistan Government with its constituents.  The righteous stand of the Indian government is thus being exploited by Pakistan for petty publicity gains. Clearly, the country is missing the woods for the trees.

Pakistan should realise that the Hurriyat’s lack of a concrete ideology, constant infighting and corruption has caused a trust deficit in the minds of the people of Kashmir for the conglomerate.

The so-called leaders of the Hurriyat have filled their coffers with money coming from Pakistan, other Islamic countries and some dubious sources connected with narcotic smuggling. They have sent their own children out of the valley even as they ask the Kashmiri youth to sacrifice their future and also their lives for a lost cause.

If Pakistan feels that this redundant conglomerate can, in any manner, assist in the fructification of its invasive designs on Kashmir, it is living in a fool’s paradise.

Pakistan would also like the world to believe that the people of Kashmir are eagerly looking forward to its help and assistance to rid them of what it wrongly projects as “Indian occupation.” Nothing can be further from the truth.

The people of Kashmir are, in fact, fed up with the constant Pakistan sponsored attempts to disrupt their lives through terrorism, ceasefire violations, infiltration of brutal foreign mercenaries and disruption caused by paid agents like the Hurriyat.

With education levels rising in Kashmir, more and more people are refusing to be drawn by the misconceived religion based agenda being propagated by Pakistan. They are resisting the proliferation of Wahabi/Salafi form of Islam and wish to resurrect their own Sufi culture and the secular concept of Kashmiriyat.

Terrorism in Jammu and Kashmir has been reduced to a mere pin prick. With no more than 200 terrorists now operating in the entire state, there is no hope of the policy of a thousand cuts mooted by former Pakistani Dictator, Zia-ul-Haq, achieving any success.

It is foolish on the part of Pakistan to believe that a mere 200 terrorists can accomplish what the 20,000 sent earlier were unable achieve? A lot of hue and cry is being made about the increased recruitment of locals of Kashmir as militants. The figures, however, have a different story to tell. Only 160 boys have joined ranks of militancy during the last five years from 2010 to 2015 as against 651 in 2005-2010. This trickle will also cease soon enough.

Prudence dictates that Pakistan accepts the failure of its Kashmir policy. It has no takers among the Kashmiri’s. The People of Kashmir are fully aware of the plight of their brethren under the Pakistani yoke in the occupied territories of Jammu and Kashmir. They are smart enough to compare the freedom that they enjoy and the development that has taken place in their area despite foreign sponsored terrorism. They know that Pakistan is bad for them. It is due to this belief that they joined hands with security forces to eradicate Pakistan sponsored terrorism from their soil.

Even the miniscule segment that, due to brainwashing by the Hurriyat, has a misconceived notion of separating from the Indian union does not look at aligning with Pakistan as an option. Perceptions are changing at a very fast pace and this thought process will also be consigned to the ashes sooner than later.

India has always displayed peaceful intentions towards Pakistan; the country did not even exploit Pakistan’s military weakness caused by its army’s enhanced engagement on its western borders with Afghanistan as a part of the ill-fated war against terror. The Pakistan Army also has a big challenge of internal strife to contend with which is weakening its defense capabilities.

Pakistan would be well advised to look inwards. The Government of Pakistan should concentrate its energies towards its internal problems and consolidate what it has rather than covet what it cannot get and, more importantly, cannot handle.

Instead of sticking to old and redundant insecurities Pakistan should take the hand of friendship that the larger and more powerful India constantly extends towards it. It should strive to build a constituency of trust that ushers peace and cooperation in the sub-continent. A statesmanlike approach will change the history of the two nations with Pakistan as the larger beneficiary.  India, while not compromising on its righteous position should keep its doors open for any dialogue that can bring peace and equanimity.