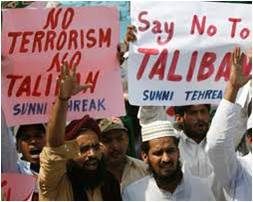 India’s sustained assertion that Pakistan has not relented from its diabolical pursuit of exporting terror into India through the line of control in Jammu and Kashmir has found further corroboration from an unexpected source. The residents of the scenic Neelum Valley in Pakistan Occupied Kashmir (POK) have, since the last few weeks, been registering a strong protest against a perceptible influx of groups of suspicious looking persons in the region. These persons are dressed in traditional Pakistani Shalwar-Kameez, they a sport long beards and mostly speak the Punjabi language. The local administration is attempting brush aside the matter by passing off these people as tourists. “This time the tourists have come in more than usual numbers and there is no extraordinary activity,” said Deputy Commissioner Neelum District, Khawaja Abdul Qayyum.

The locals, however, are not ready to buy this argument. They are convinced that these people are trained terrorists who are gathering in the area for infiltration into Jammu and Kashmir. So strong is this conviction that a number of open demonstrations have been held in Athmuqam, a Sub-divisional Headquarter of the area, to protest against this influx of undesirable elements. Traders have also resorted to shutdowns, even as a large number of women have contacted People for Peace (PFP), a civil society organisation working in Pakistan, to say that some suspicious none-local persons have been trying to establish camps in Kuthan Peeran, Aathmuqam, Shah Kot, Dudhnial and surrounding villages of the Neelum Valley. Hundreds of school children also held a protest march and submitted a list of demands to officials at a military camp.

“The PFP consider this recent movement of outlawed elements in Azad Kashmir a great threat for peace and tranquility in the region and it would protest publicly if government did not accomplish its responsibilities to save citizen from presence of such nefarious elements’ says a letter to the Pakistani authorities written by representatives of the PFP. Yet another memorandum by Arif Shahid, Secretary General of the All Parties National Alliance (APNA) states: “Jihadi activities have been restarted during the last few weeks. Most of the activities are concentrated in the Neelum Valley along the line of control (LoC). The men are not locals – they have long hair and beards. Most do not speak the local language.”

Neelum Valley is surrounded on all sides by high mountain peaks and has a very thick forest cover. Along with Bagh region and Lipa valley to its south, it is the most suitable launching point for terrorists due to its forests, deep ravines and high altitude passes. It has been a major staging post for infiltration ever since the advent of militancy in the late 1980’s. During the peak periods, infiltration attempts over here invited massive retaliation from the Indian forces in the form of Artillery shelling which made life miserable for the local people. It was one of the worst-affected areas along the LoC. The shelling stopped once ceasefire was declared in 2003; infiltration operations also witnessed a comparative decrease during the Musharraf era. The region has been witnessing relative calm ever since.

The locals are now apprehensive that the large number of terrorists who are flocking to the area with the intention of crossing over to India will invite retaliatory fire from the Indian side and the peace, which has been maintained since 2003, will get disrupted. The people are very scared that the proxy war will start all over again. Their fear has been compounded by a spate of cross border firing and shelling incidents that took place around the period of Eid-ul-Fitr, something that has not happened for many years now. Artillery shelling in the Dodnial-Kail sector of the Neelum Valley has become a routine mainly due to regular attempts to infiltrate large groups and open provocation by the Pakistani troops.

Some other inputs also point towards attempts by the Pakistan Army to up the ante so far as infiltration is concerned. Recently, one Mohammad Saleem Rehmani, was arrested by JK Police from Budgam, Kashmir. He had infiltrated into the Valley a few months ago. During interrogation, the arrested terrorist said that there about 250 to 300 militants trained with him in handling weapons and launching attacks on security forces in Kashmir. He further clarified that permanent training camps have been sealed since the 26/11 terrorist attack on Mumbai, but makeshift camps have been set up in forests where training is being imparted. There are four to five launching pads active in POK where 45 to 50 militants are always ready to infiltrate.

During the 1990s, tens of thousands of villagers from the Neelum Valley were earning a living by working as guides and porters for the “agency” (ISI). The region was a potent recruiting base for terrorists. Many Jihadi organisations used local youth to advance their agenda. All this changed when parents realised that they were losing their sons to a lost cause, especially so, since most of the boys who were infiltrated never got back as was promised. Mostly the hapless parents were told that their sons were martyred in Kashmir.

With the advent of the ceasefire the people of the beautiful Neelum Valley realised the advantages of a peaceful existence and they do not wish to see a repeat of the harrowing experience that they were subjected to earlier. They wish to remain isolated from the cult of terrorism and militancy and are willing to take on the mighty Pakistan State and Pakistan army to protect their right to a normal life. One can only hope that good sense would prevail upon the Pakistani leadership sooner than later.