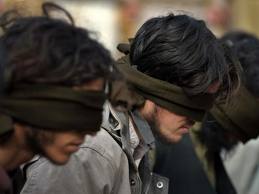 While India is crying hoarse for criminal action against Hafiz Saeed and the United States has gone to the extent of declaring his organization, the Lashkar-e-Toiba (LeT) a terrorist outfit, the amiable emir continues to be a hero in Pakistan. This is so because he has the support of the Pakistani government as was very obvious from the statement of the Pakistan Interior Minister Rehman Malik during his recent visit to India. He made it abundantly clear that his organization has no intention of taking action against the maverick fundamentalist.

Hafiz Saeed roams around freely across the length and breadth of Pakistan advocating a return to Islamic principles and tenets to rapt audiences while distributing largess in the name of social service through Jamait-ud-Dawa (JuD) created as a mask after the ban on the LeT He has managed to project the JuD as a welfare social organisation by playing on the ignorance of gullible journalists and semi literate youth, by doing so, he has also created the identity of a moderate social worker for himself.

Now a stage has come when even western countries have become party to this malevolent drama being played out by one of the most evil terrorists ever to have been churned out by Pakistan. Unmindful of the fact that Saeed is wanted for complicity in the Mumbai 26/11 terrorist attack which had an international signature, countries like Great Britain have allowed publication of research papers by well known universities like Oxford which project the JuD as a organization working to benefit society.

The JuD caught the attention of the global media in the aftermath of the earthquake that devastated Pakistan Occupied Kashmir in 2005. It received massive funds from Islamic countries which were passed off as collections from the people of Pakistan meant to be utilized for rehabilitation of inhabitants of the devastated areas. Most of the money was siphoned off for funding terrorist activity and a small amount, with massive publicity, used for the benefit of the earthquake victims. This was also the time when the JuD exploited the weakness of the region to expedite the larger objective of changing the demographic patterns by large scale settlement of the Punjabi people over there.

Surprisingly, there are many in the international journalist community who continue to believe that the JUD did good work post the devastation and also later during the floods of 2011. Massive support for the propagation of this view has been forthcoming from the friends of the JuD in the Pakistan army and the Inter Services Intelligence who are blatantly used official machinery to spread propaganda in its favour with devastatingly good results. Things have gone to an extent that Saeed had the temerity to offer support to the United States in the aftermath of Hurricane Sandy and this offer of assistance was carried through a television channel of the stature of CNN. Ncredibly, he has a bounty on his head and still manages to make such bizarre suggestions.

The willingness of the west to make a Santa Claus out of Hafiz Saeed can be explained on the premise of the need to isolate the more dreaded al Qaeda. This objective also explain away the official support that is been given to Pro-Saeed propaganda by Pakistan authorities. Another logical explanation would be the growing imprint of Islam in the intellectual space of western countries where coexistence of the diverse ideologies has become a fait accompli so long as violence is avoided.

While the see saw politics of the western world continue Hafiz Saeed and those of his ilk have gained the confidence to pose a major problem in the already tottering society of Pakistan, They are joining hands to seize power in the forthcoming elections through the perfectly legitimate and legal route of the ballot. The mainstream parties are well aware of the hold that these militants have and are not averse to creating collaborations both overt and covert, hence radicalisation of politics in Pakistan is become as big a reality. Saeed may well become the king maker in Pakistan in the near future.

In case these extremist elements manage to seize power in the coming elections the scenario will gain a critical dimension. It is well established that Sunni power centres like Saudi Arabia have a problem with the Shia Iranian theocracy which they look upon as a threat to their monarchies; they feel no compunction in using their unlimited financial might in converting places like Pakistan into their chosen battle ground against the Shia and other Muslim communities. Hence with the radicals gaining political power, the possibility of ethnic cleansing of the minorities, already at a high scale, will gain unthinkable proportions. Prominent writers in Pakistan have already started referring to Shias as endangered species and talk of Ghettoisation on a sectarian basis.

Intolerance, sectarianism and radicalisation in Pakistan is becoming dangerous not only for the region but for the world at large. While the world is looking at its own interests the larger danger of a spill over in the immediate neighbourhood followed by a global reach is not being given due attention. If matters are not taken in hand immediately a monster of unimaginable proportions will be unleashed sooner than later. At that stage efforts to quell the attendant violence and mayhem it will be proverbially herculean.

The world has to take on the challenge of reviving tolerance and pluralism that has been the trade mark of the Pakistani Nation for a better part of its existence. Pakistan also needs to be worried about the manner in which the likes of saeed are gaining political clout. A concerted effort has to be made to support voices of moderation in Pakistan so as to expunge the environment of hate which is presently predominant. If this is not done soon enough the world will be staring at a human disaster of unimaginable dimensions.