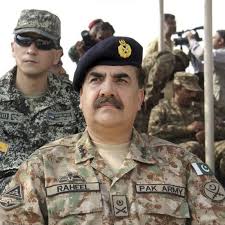 There is no doubt that Sharif is the most powerful man in Pakistan – but which Sharif? Definitely not Nawaz Sharif who is more interested in foreign junkets than the state of his country, but the new Pakistan Army Chief, General Raheel Sharif. The chair of the Army Chief has not lost its power or its sheen after the exit of the all powerful General Ashfaq Kayani. There is not an iota of doubt about the fact that General Raheel Sharif call the shots in the country.

The misfortune of Pakistan is that its military establishment considers itself to be above the law but is not ready to learn from its mistakes. So far as India is concerned the Pakistan Army has committed a series of blunders including the four wars that it thrust upon the country and landed up with a bloody nose each time; it was the Pakistan Army that gave a permanent scar to Pakistan’s national psyche with its humiliating defeat in 1971. The Kargil disaster was a repeat of 1971; yet it has not thought of changing its anti-India policy.

Pakistan has had numerous chances to improve its relationship with India; notably, the Shimla summit, the Agra summit and the Lahore summit. The Pakistan Army has successfully managed to derail all of them. In the early 1980s, relations between the two nations soured particularly after the Siachen; the intensification of Kashmir insurgency in 1989 and the 1999 Kargil war conflict all engineered by the Pakistan Army. Political effort was once again made to bring in some credible confidence building measures (CBM’s) such as the 2003 ceasefire agreement and the Delhi–Lahore Bus service; to an extent they were successful in deescalating tensions. Sadly, these were also impeded by periodic terrorist attacks whose onus lies predominantly on the Inter Services Intelligence (ISI), an integral part of the Pakistan army.

In fact, terrorism is the by-product of the realisation by the Pakistan Army that it is incapable of winning a full scale war against India. To avenge partition of East Pakistan, its incessant efforts have been to separate Jammu and Kashmir from the Indian union by igniting flames of insurgency. That its evil designs have caused untold misery to innocent civilian people is something to which its General’s give no regard whatsoever.

Pakistan has provided safe heavens to many terrorist groups operating in Jammu and Kashmir. Many training centers are active in Pakistan Occupied Kashmir. It uses proxy terrorists groups to achieve its goals. Several militant and criminal groups are backed by senior officers in the Pakistani army, the ISI and other organisations supported by the Pakistan army; a prime example being Lieutenant General (Retired) Hamid Gul who, while in service, was the Director General of the ISI and is now a conduit between the terrorist organisations and the government. The Pakistani Inter-Services Intelligence has instigated, encouraged and aided the misconceived Kashmir independence movement through terrorism. This is because it considers strife to be an easy way to keep Indian troops distracted.

The foreign policy of Pakistan is firmly in the hands of its army; at the direction of the army it is hinged on denial of any involvement in terrorist activities in Kashmir. The argument being given is that the country only provides political and moral support to the secessionist groups who wish to escape Indian rule.

While creating turmoil in India the Pakistan Army has lost its sense of propriety. It’s thought process has become so warped that it is applying the evil template laid out for Kashmir on its own people also. The Pakistani Army recently carried out a military operation in Mir Ali, North Waziristan Agency, killing at least 40 people and injuring dozens of others by use of artillery fire and helicopter gunships. According to the army, most of those attacked and killed were insurgents. However, locals from Waziristan and other places in the Federally Administered Tribal Areas (FATA) are out on the streets, protesting in different areas, including Peshawar, claiming that most people murdered in these attacks were civilians. This was not a one-off encounter, such barbaric atrocities regularly happen in the tribal areas where hundreds have been killed and a larger number displaced due to avoidable and excessive use of force.

The army is getting away with all this because of lack of will to get it under political control. There is no doubt the Pakistani Army committed war crimes in 1971. Yet in history books and schoolrooms throughout Pakistan, the army’s atrocities are glossed over. This denial prevails despite an official study by the Pakistani Army which points to the contrary. Just after the war, Prime Minister Zulfikar Ali Bhutto set up an independent judicial commission to investigate atrocities committed in East Pakistan in order to understand why the army had failed there. When the Hamoodur Rahman Commission report was published in 1974 it documented how, under the pretense of quashing a rebellion, the Pakistani Army had planned and carried out the execution of intellectuals, soldiers, officials, businessmen and industrialists and had buried them in mass graves. If a check had been put at that stage, if the perpetrators of the heinous crimes had been Identified and punished, things would not have come to a stage where they are now.

Pakistan is at a crossroads; it may descend into anarchy dragging the entire South Asia into a state of turmoil. With each act of terrorism or military belligerence not only does the peace process come to a standstill, but also whatever progress has been made is destroyed. The onus rests with the Pakistan Army. In case things are to change the Pakistan Army will have to come out with clean hands, admit its faults and take the righteous path. If peace has to be ushered, it is the Pakistan Army which will have to convince India that it will not allow its soil to be used for terrorist activities. It will have to give a solemn promise of maintaining peace and tranquility on the Indian borders and line of control and abide by it. For peace to prevail on the sub-continent Pakistan Army will have to undo the vicious role that it has played in India-Pakistan relations.