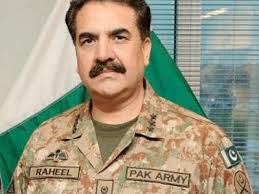 reflects the ignorance of the Pakistan Army chief about the political history of the sub-continent.

In his statement, he expressed the need for resolution of the Kashmir dispute in accordance with the United Nations resolutions. Even a novice in Indo-Pakistan relations knows that the two countries have, by virtue of the Shimla Agreement, agreed to address their issues bilaterally.

Pakistan has been the biggest violator of the provisions of the UN resolution on Kashmir by not vacating the occupied territories to facilitate a plebiscite. It has grossly violating the provisions of the resolution by revoking the State Subject Act applicable in the state, illegally exploiting the natural resources of the region, denying freedom and constitutional democracy to the people, ceding territories to foreign powers and changing the demographic pattern through settlement of Punjabis and Pathans in the region.

There is an unfinished agenda of partition in the state of Jammu and Kashmir. It, however, relates to the return of such territories of the state to India that continue to be under illegal and suppressive occupation of Pakistan against all principles of justice and international conventions. The position taken by the Pakistan Army Chief is surreal and bizarre.

The question that arises is – why did the Army Chief make this statement at this point in time? What was he trying to convey, to whom and for what reason?

The statement reinforces the perception that it is the Army in Pakistan that dictates the Kashmir agenda and not the political leadership or the government.  The tacit, behind the scenes control exercised by the army earlier has now been shed for a more open and proactive approach.

By saying what he has said, General Raheel Sharif has left no doubt about who wears the pants in Pakistan. While the General comes across as the man of the house, Prime Minister Nawaz Sharif has been reduced to a cosmetic appendage.

The fact that this statement was made during the address of the Army Chief at the National Defence University of Pakistan comes with yet another set of connotations. It is amply clear that the Army Chief looks towards the army to accomplish this “unfinished agenda.” This implication is that the Pakistan Army now holds the responsibility of resolving the Kashmir imbroglio militarily, thus sidelining the political option.

With the malevolent intention of the General thus established, what remains to be seen is the motive behind making the statement at this point in time. The Pakistan army is presently at its weakest point ever. The disaster facing the army includes the failed Operation Zarb-e-Azb in North Waziristan, uncontrolled insurgency in Balochistan and an adverse security situation in other parts of the country. This situation has showcased the fallibility of the Pakistan Army. It’s carefully nurtures persona of being the last bastion in the state of Pakistan is falling apart.

Traditionally the Pakistan Army diverts attention from its weaknesses by resorting to an unhealthy round of India bashing. It seems to be following the time tested approach yet again.

The catalyst, in this case, has been provided by the principled stand on Gilgit-Baltistan taken by India during Prime Minister Narendra Modi’s recent visit to China. China and Pakistan have agreed to build a $46 Billion economic corridor through the disputed territories of Gilgit-Baltistan that are under forcible occupation of Pakistan and whose considerable portion has already been illegally ceded by Pakistan to China. Prime Minister Narendra Modi, during his meeting with the Chinese leadership, bluntly stated that the project passing though the occupied territories is “unacceptable”.

General Raheel Sharif was quick to take on the opportunity provided by the India-China dialogue to make his “unfinished agenda” statement and send a clear message of his dominant position in the political hierarchy of the nation. What should have been done by the foreign office of the government was done by the Army Chief!

A second reason behind the statement was the elections in Gilgit-Baltistan that were to be held under strict control of the Pakistan Army. General Raheel Sharif, with this statement, attempted to legitimise both the election process and the presence of the army in the region.

The elections, that have since been held, have given a predictable verdict of majority won by the ruling PML (N) party. It is notable that in the occupied territories elections are invariably won by the party which is ruling the country, such is the blatant level of pre-poll rigging that takes place with active connivance of the Pakistan Army.  There have been howls of protest from the locals and other political parties against the blatant rigging that has been carried out this time round also but they have gone unheeded.

In yet another address at the Pakistan Naval Academy General Raheel Sharif reiterated his position by saying, “We are ready to pay any price to protect our nationhood and safeguard Pakistan’s interests, be it Kashmir, development of new ports or exploitation of natural resources.”

The intentions of the army chief have become very clear; he is all set to up the ante in Kashmir to divert attention from the failure of his army in countering terrorism in his own country.

The role of the security forces in Jammu and Kashmir, especially the Indian army, will become all the more challenging under the developing circumstances. One can expect a rise in infiltration and terrorist activity as also civil disorder engineered by Pakistan’s Inter Services Intelligence (ISI) through its paid stooges in the valley. The Government of India and the State government need to take notice of the developments and initiate all measure to defeat this immoral and reprehensible agenda of inimical forces.