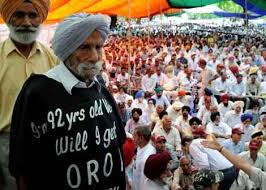 The OROP face-off has now gone way beyond the original demand for pensions. If the poor old veterans who are sitting at Jantar Mantar, New Delhi, and other places across the country could go through a major portion of their retired life without OROP, they will live without it through their twilight years as well. Being soldiers, they will adjust and make the best of the situation. Even if the government gives something now, after creating so much of a fiasco, it will not be able to bridge the trust deficit that has been created.

The much touted consciousness for national security that the Bharatiya Janata Party (BJP) has always professed has turned out to be nothing more than a myth. If the Congress was uninterested, the BJP is rudderless. Its handling of the OROP issue has reinforced the common perception that it is a party of “Baniyas” (traders) that simply cannot resist bargaining, even in matters as sensitive as national security.

While fighting for their right, the soldiers have gone through the major political parties. All have given only lip service and nothing else. Earlier, the soldiers were wary of the Congress, but they saw a ray of light emanating from the BJP before the general elections. The myth now stands broken. The end result is that the relationship between the political class and the soldiers has also reached a nadir

Soldiers are no fools; they are patient but they understand everything and make strong long lasting opinions. Those serving may not be saying anything but most would have already made their choices for the future, their own and that of their families.

Another myth that stands broken is the avowed love of the people of India for their soldiers. Despite the many patriotic songs and movies steeped in sentiment, not many came forward to stand for the soldiers in their time of need. At the end of it all, a typical Indian is concerned only about himself, at best, his family. He simply cannot see beyond that.

Since the nation gained independence, integrity and sovereignty of the nation has been maintained only by the grit and courage of its soldiers who have fought and won against seemingly insurmountable odds.

It is common knowledge that we were badly mauled in the 1962 Indo-China war because the armed forces were short of everything from military boots to military hardware and weapons.  At that time we had been independent for 15 long years, yet we were so unprepared!

In 1965, Pakistan had the gumption to attack India because it had a distinct edge in Armour, Artillery and Aircraft. It was, once again the grit and courage of the Indian soldier that saved the day. Could somebody spare a moment to contemplate as to how a far larger country like India, with resources many times more than Pakistan, could allow such a strategically disastrous situation to come by?

During the Kargil War, before sending his troops to war the then army chief, General VP Malik ominously said, “We will fight with what we have.” Today, the country sings paeans about the bravery of Major Vikram Batra and Captain Manoj Kumar Pandey, who died fighting for their country during the war and were awarded the Param Vir Chakra (Posthumously). These two brave sons of the soil represent the hundreds of brave soldiers who sacrificed their lives for the sake of the country during the conflict.

While going into raptures over the bravery of its soldiers in Kargil does the common man ever pause to think as to why the chief of their army had to make such depressing statement before pushing his men into war. At that stage, the country was aspiring to become a super power, so why was it not ready even for a limited conflict?

It is the duty of the political leadership and the bureaucracy to keep the armed force in full fighting fettle at all times. These organs of state have failed consistently in the discharge of their duties. It is, therefore, not the soldier who is responsible for the country going to the brink of a security precipice on more than one occasion since independence; the political leadership and its defunct bureaucracy are the actual defaulters. Sadly, nobody seems to have learnt any lessons and taken any action to set things right.

It is historically established that the Indian sub-continent remained enslaved for millenniums not because its soldiers were inefficient but because they were let down by their “monarchs and their people.”

It seems that modern free India is not ready to learn any lessons from history and is energetically following the age old path that will ultimately lead to subjugation.

It will not be the soldier who will let down his country; the nation will fall under the weight of the self centered attitude of the public, the avarice and blinkered strategic vision of the leadership and the ineptness of the bureaucracy.  The nation will suffer a downfall due to its inherent contradictions and inability to put in place a credible leadership and an efficient government. Unfortunately, the onus of failure will fall on the hapless soldier as has happened earlier.

Soldiers talk less and do more; they are not proficient in sophisticated articulation and communication of their thoughts. They stop short of using such words that would hurt the image and stature of the country. Within the ambit of their communication limitation, they have been trying to get across to the nation the  danger being posed to national security due to the general apathy of the political class and the bureaucracy in general and the ongoing OROP face-off in particular. The agitation and its resolution is the tip of the iceberg, there is a lot to be done to ensure that the nation is secure from all fronts and the time to start is now.