A C 17 Globe Master lll of the Indian Air Force took off from Hindan Air base at 0400h on 2 March, 2022 and headed for Bucharest, the capital city of Romania, on a relief mission as part of the daring humanitarian evacuation mission code named Operation Ganga, launched by the Government of India for safe return of its citizens, especially young students studying in various universities of Ukraine. Later, three more Globe Masters left for Poland, Slovakia and Hungary.

There were about 25,000 citizens of India in Ukraine before 1 February, 2022. After the travel advisory issued by Ministry of External Affairs (MEA), Government of India, approximately 8,000 Indians returned home by regular commercial flights from Kharkiv, Kyiv, Lviv and Odessa under own arrangement.

The war broke out between Russia and Ukraine on 24 February, after a long pause and war of words.

Russian Armoured Brigades with motorised divisions rolled in from three directions and headed for Kyiv. Chernihiv, Sumy and Kharkiv. The Russian forces are now in the outskirts of the Ukranian capital Kyiv since1 March 2022. Ukraine forces are not as strong as the Russian Army but are giving strong resistance. Russia has declared  temporary unilateral ceasefire on 07 March in four cities,  Kharkiv , Sumy , Mirupol and Kyiv, probably for evacuation of civilians and foreigners. The main objective of Russia is to remove Pro-west  Ukraine President Volodymyr  Zelensky and assure  that Ukraine does not join NATO.

Operation Ganga, that began on 26 February, got a major push on 28 February after a special cabinet meeting by PM which led to Indigo, Spice Jet and Air India Express joining the flag carrier Air India (TATA) in operating flights to ensure fast and safe return of stranded Indians at Ukraine. later Indian Air force also chipped in with four C-17 to boost up the resources. As at 1000 h on 7 March, 76 Flights had landed in New Delhi/Hindon/Mumbai. 12,000 Indians had been evacuated who reached home safely carrying National flags and happily shouting “Bharat Mata Ki Jai.” The Government has exempted RT PCR Test and even vaccination certificates before boarding, 14 days self observation is recommended on return to India if not vaccinated.

Students travelling back from Ukraine

Prime Minister Narendra Modi has established a special cell to monitor the current situation from the war zone. He has spoken with the Presidents of Russia and Ukraine to ensure safety of Indian students and provision of a safe passage to Indian convoys heading west towards Poland, Slovakia, Hungary, Romania and Moldova.  Citizens of other countries, especially the Chinese, are being attacked and harassed by Ukraine troops while buses and vehicles with Indian flags are being permitted to proceed towards the western borders safely.

The prime minister has nominated four senior cabinet ministers to proceed to Eastern Europe to facilitate Indians crossing the Ukraine borders, where a large crowd of all nationals has assembled to cross over. General VK Singh is in Warsaw , Hardeep Singh Puri is in Budapest, Hungary, Kiren Rijiji  is in Bratislava , capital of Slovakia and Jyotiraditya Scindia has been given responsibility of evacuation of Indians from Bucharest, capital of Romania.

The maximum flights have come from Bucharest, Romania.  Air India has an advantage of flying non-stop from Budapest, Warsaw or Bucharest as it is employing Boeing 787, a bigger and wide body aircraft  with more capacity as compared to Airbus 320/321 or Boeing 737, utilised by Indigo, Spice, AI Express and Go First, which has limited range and less passenger capacity and has to stop over at Kuwait /Istanbul for refuelling. All private Airlines have extended full cooperation and dedication, Air India as usual leads the campaign.

The Indian Government decided to incorporate Indian Air Force on 2 March, 2022 keeping in view the limited capacity of civil airlines. Air force has a variety of cargo aircrafts like IL 76, IL 78, AN 32 of Russian origin) and C 17 Globe Master, C 130 J Hercules of US Origin.  IAF has finally selected C 17 Globe Master for the operation due to its long range, mission reliability and heavy lift capacity .The first flight landed back in India with 200 students at 0900h on 3 March at Hindan Air base. The second  C 17  from Budapest and third C 17 from Warsaw also landed safely on O3 March late night with 200 passengers each.

Till 7 March mid day, IAF had flown 10 sorties and had brought home from the war zone 2,056 Indians safely apart from delivering 26 tonnes of relief materials including  medicines, warm clothing, tents and solar lights for Indians and Ukraine people affected by the war.

C 17 is a wonderful flying elephant manufactured by McDonnell Douglas, Boeing. It is powered by four Pratt and Whitney PW2000 engines. Eleven C 17 Aircrafts were acquired from United States in 2011 by India. It is designed to carry 180 fully equipped troops, 70 tonnes of cargo or 325 civil passengers with light luggage. This aircraft can lift a fully loaded T 90 Tank and can land on a makeshift/un-metalled runaway. It can travel 4200 kilometres non-stop once fully topped up. 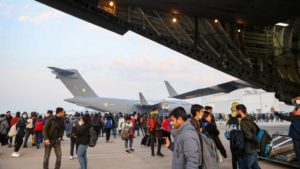 There are plans to send  more flights to the war zone to ferry balance of Indians still trapped in Ukraine and heading for borders to cross over to the western neighbours.

Operation Ganga is the most active and unique operation conducted by Indian Govt among all nations of the world who have citizens in Ukraine. Countries like China have not even established support organisations for its nationals or issued any travel advisories. USA,Germany and Britain have clarified that they are not in position to evacuate their citizens. Most of the Embassies of European nations have closed down at Kyiv but Indian embassy is still functional.

Earlier also, India  had airlifted its 1,70,000 nationals from Kuwait in August/ September 1990 before Desert Storm was launched on Iraq by the US. 4640 Indians were evacuated safely in April 2015 during Yemen crisis under Op Rahat by IAF and 800 Indians were airlifted from Kabul under Op Devi Shakti in August 2021.

Operation Ganga is in full swing, we must compliment the Indian Government, all the Pilots and crews of IAF, Air India, Indigo, Spice, AI Express and Go First, who are evacuating their countrymen from  the high risk war zone beyond the call of duty. The major challenge for the Indian government is to evacuate about 1000 trapped students at Sumy and Kharkiv in North Eastern Ukraine for which Indian Government has a Plan B – Two IL 76 are on runaway readiness for Moscow as and when safe corridor is allotted. The PM has promised that India will not leave even a single willing Indian in the war zone, we always stand united in hour of crisis.